History of MSU vs. Auburn

Share All sharing options for: History of MSU vs. Auburn

This is one of the more streaky series MSU has been involved in. The first game was in 1905 - an Auburn win. The Tigers ended up winning the first 10 games in the series until State (or A&M, whatever) took the next three, then Auburn took the following three. In 1940, a tie with Auburn was the only blemish to a 10-0-1 record. After that, State took control winning 9 out of the next 10 including seven in a row.

This series has special meaning for me as I was raised in a split household - by mother went to Auburn and my father to Mississippi State. When it came time to decide which college to go to, I let the first acceptance letter in the mail box make the choice - fortunately State's admissions department was quick on the draw and I've never looked back....a Bulldog for life.

I say that because my first memory of being at a game (and actually knowing what was going on) was the 1991 matchup that saw Jackie Sherrill break that streak with a 24-17 victory on the Plains. State won again in '92 before yielding to Auburn four straight times. But then State got four straight of their own from '97-'00. The streaky-ness continued with Auburn winning the next six games, with 2007 the only road bump through 2011.

The game that broke my streak was 2010, and it was due to it being on a Thursday night. I went to the game last year, and going in I felt pretty confident about our chances as everyone did. I've got two brothers who were in school at Auburn last fall, and I think they even felt like it would be nice for Mississippi State to finally win one....ya know, after they stole Cam Newton. But we couldn't get it done. It was the worst I've ever felt after watching a game....sickening. Just unbelievable. 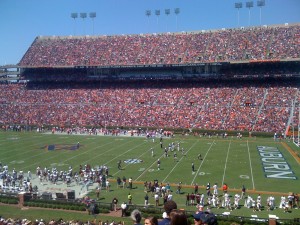