Can Mississippi State break from even with a short week win over Kentucky? Can Mark Stoops lead his men into Starkville and steal away an upset? Are Kentucky fans even still watching football at this point in the year? Are State fans? Thursday is a big game for both teams, so let us help you get ready for it with this week's The Big Preview: MSU vs. Kentucky.

Share All sharing options for: Mississippi State vs. Kentucky: The Big Preview

It's time for week seven of The Big Preview, as we try to break out of this .500 record on the winning side of things. The good news is that we take on Kentucky this week, who, well..., is ready for basketball season. The bad thing is that last weekend was upset Saturday in the SEC. Will that spill over to MSU and UK? State fans certainly hope not.

Remember, it's a short week this week, so you need all the preparation you can get for Thursday's game. Let us help you get prepped with our Totally Serious Opponent Report, our Game Preview, a Matchups Preview breakdown of MSU vs. Kentucky, and finally our question and answer session with our friends over at A Sea of Blue.

What's up, y'all. I'm here filling in for James this week to talk to you about Big Blue Nation. That's right, it's time to talk Kentucky. Now, in other places on the internet and even here in this article below, you can get great, factual sports related information about the Kentucky football team. But that's not what I'm here for. I'm here to give you the facts that matter. Let's get this Totally Serious Opponent Report1 rolling.

Actually no Google, but I guess I'll read about the 141 championships while I'm here.

I'm usually not one for predicting the score of a game. I'm really not so good when it comes to picking the winner of games either, so you see why it would be in my best interest to not try something even more complicated such a predicting exact scores. However, this week when Dan Mullen and Mississippi State take on the Kentucky Wildcats led by first year head coach Mark Stoops, I have a good idea what the score may be.

So far this season, the MSU defense gives up 23 points per game on average. The Kentucky offense musters up just under 18 points a game. On the flip side, MSU's offense is scoring 30.5 points per game, and Kentucky is yielding 31 points per contest. With that information aligning so well, I have to say a score that reads 30-20 or 31-20 in favor of the Bulldogs when the clock shows zeros on Thursday night sounds just about right to me.

While, on a neutral site my theory might hold true, this game will be played in Davis-Wade on Thursday night, as the ESPN featured matchup, so I expect a home crowd to help rattle the young Wildcats. Twice this season, the MSU defense has given up only seven points at home, to Alcorn State and Troy, opponents not too far behind the Wildcats.

This game could certainly become a worry for the Bulldogs if they come into the contest unfocused and unprepared, similar to their last game against Bowling Green. However, it should be a game where Dan Mullen and company can earn an SEC win heading into a difficult, SEC West-heavy portion of the schedule to end the season. Without this win going forward, bowl eligibility will certainly become very close to unattainable. However, with the win, the Bulldogs could still be in line to earn a bowl bid.

This matchup should also give the MSU offense a chance to further their perfecting of the two quarterback system that Dan Mullen seems insistent on continuing. This could allow the Bulldog offense to get used to the rapid transition of quarterbacks and also help give the players more game reps in each quarterback's packages.

It should also be noted that MSU is very likely to get Kentucky's best shot as the young Wildcats and their young leader will be looking to gain an all important SEC victory in year one of a total, up from nothing, rebuild. If anything, Stoops and his team will be fighting to keep interest on the recruiting trail. This is a game that MSU should control from the start, but that is only if they come out and do what they are capable of doing and that is to take control.

While I am not 100% positive the score will be where I previously suggested, I have to go on my original hunch. I usually don't predict the outcome in these previews, but I think the Bulldogs get the win on Thursday with a 31-20 victory in Davis Wade, under the lights, on ESPN.

How we looking on Injuries this week Fonzie?

So, after looking at those stats, how many yards do you expect State to run for on Thursday night? The Wildcats have been pretty dreadful against the run. Only Texas A&M (226 YPG) is below them and the Aggies get gashed by everyone. There is a 32 YPG difference between 12th (UT) and 13th in the SEC. Having watched them a little this year, things aren't too good on the front seven. They've got a couple of players, but the Dawgs should be able to run it pretty effectively, especially when Dak Prescott is in the game.

Let's just say Kentucky has had their struggles at OL this year. They've given up 16 sacks so far, and they are 13th in the SEC in rushing offense. State's defensive front has been good all year, easily surpassing the numbers they put up last year with a more aggressive approach.

There's no question the Bulldogs secondary is the weakness of the defense, but that could be negated if the pass rushers can get to the quarterback....not just sacks but QB hurries as well.

This may be an area where Kentucky could win the battle. How much will Tyler Russell play? And if he does, will UK's secondary be able to contain MSU's receivers themselves allowing them to put 8 or 9 men in the box to stop the run? In my estimation, Kentucky's only hope is to have a great game in 1-on-1 pass coverage allowing them to load the box.

Q&A with A Sea of Blue

1. What is the temperature of the Kentucky fanbase right now?

Well, it's a bit cooler than it was earlier in the season after suffering from the ravages of an especially difficult schedule that we just don't have the talent or depth to manage. Losing all 4 of our opening SEC games has put a pretty good damper on enthusiasm, but we knew it would be a very difficult year.

Hopefully, the second half of the season will provide some opportunities for this team to win a game or three. This is still the SEC, and Kentucky is deservedly seen as the worst team in the league this season, so I use the term "opportunities" advisedly. The odds are we will not be favored against any SEC team this season, so we'll have to pull an upset to win even have one.

2. How is Mississippi State viewed among Wildcat fans - as a swing game or as a game that would be an upset if they won?

Mississippi St. is always viewed as a tough, but winnable game. No matter what MSU is, they are not Alabama, or South Carolina, or Florida, or even Louisville - not this season, anyway. Our view isn't intended as a slight, but there is unquestionably a better chance of Kentucky pulling an upset in Starkville as opposed to, say, Columbia.

With that said, Kentucky would arguably have to play it's most complete game of the season to defeat Mississippi St. at home, and there's really no reason to believe they are ready to do that yet with our starting quarterback, Jalen Whitlow, out for a while.

3. What are Kentucky's biggest strengths and weaknesses on offense?

The offense itself, when run well, can be really tough to stop. The Air Raid tries to isolate athletes in space like other spread option style offenses, and Kentucky has no shortage of solid athletes.

What it lacks is a good pass-blocking line, and that is what has held back the offense, as well as some difficulty developing an offensive identity due to a quarterback issue.

The biggest weakness has been a combination of the line and the quarterback. We haven't had consistent play out of either, and right now, Kentucky is last in the league in sacks allowed yardage and tied for last in sacks allowed.

4. What are Kentucky's biggest strengths and weaknesses on defense?

Kentucky has excellent defensive ends and a solid pass rush. Last weekend against Alabama, the Wildcats struggled because of the much more skilled Crimson Tide offensive line, and also we lacked one of our best pass rushers, Bud DuPree, who was out with an injury.

Alabama is really the only line that has done a good job of stopping Kentucky from rushing the quarterback. We'll take that as a badge of honor, because Alabama is really, really good.

Kentucky has also had a very good pass defense up until the Alabama game. I think that was honestly as much because of how good the Crimson Tide are as how bad Kentucky is.

5. What do you believe UK has to do to win in Starkville?

Move the ball offensively on nearly every series, whether they score or not. The problem has been that Kentucky's offense has struggled so badly, they simply cannot keep the UK defense off the field long enough to rest. Because Kentucky is very thin depth-wise, that leads to a tired defense and difficulty stopping the powerful offenses UK has been facing so far.

If Kentucky can move the ball consistently against MSU, the Wildcats have a chance. Unfortunately for Kentucky, the Bulldogs have one of the better defenses in this league, and it isn't as if they haven't played anybody.

Even though MSU isn't a particularly good offensive team, at least so far, if their defense can keep the Kentucky offense off the field, you have to like the Bulldog's chances. So for UK, it's really kind of a catch-22, since our biggest weaknesses, the offense and rushing defense, happens to sit diametrically opposite your biggest strengths - your defense and rushing offense. 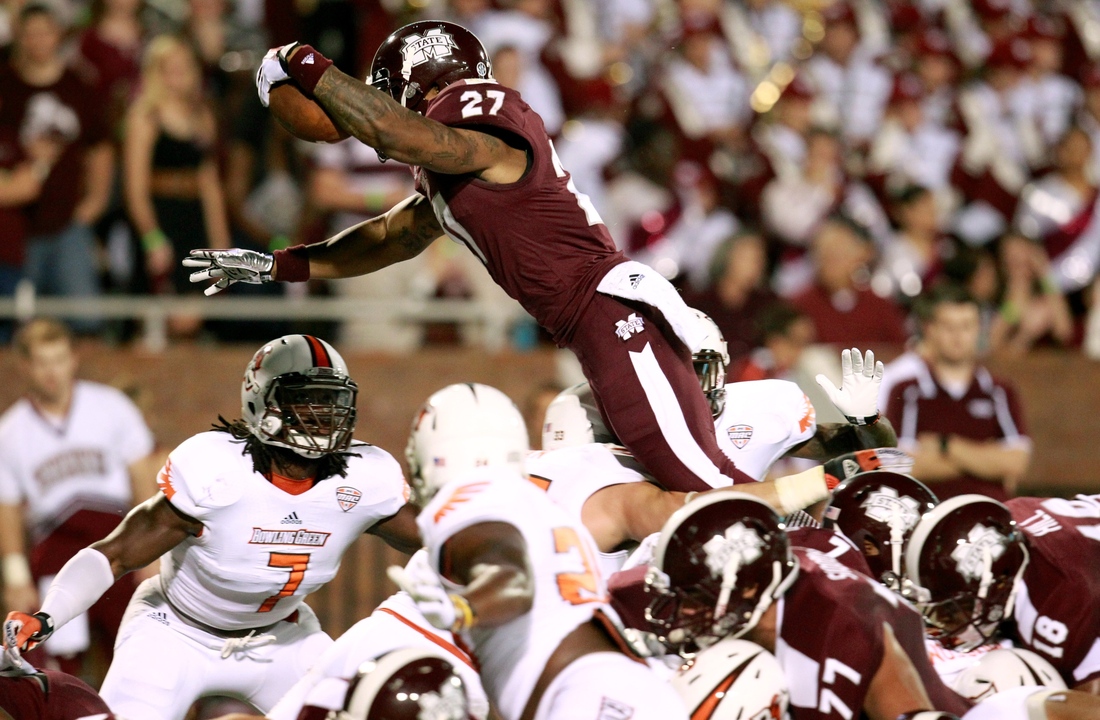