We're in the thick of it now; there's no turning back. We've descended into the valley of the shadow of the toughest stretch of our schedule. Can we make it? Can we salvage a game here and there and emerge into the light with bowl eligibility? How will the team perform on the road after a tough road loss last week on the complete opposite side of the conference? Will Manziel make minced-meat of our defense again? We'll get all the answers for these questions on Saturday, but right now, let us get you prepped for Saturday's ALL MAROON SHOOTOUT with The Big Preview: Mississippi State vs. Texas A&M. [A note on the header picture1]

Share All sharing options for: Mississippi State vs. Texas A&M: The Big Preview

It's time for week nine of The Big Preview, as we get set to enter the valley of the shadow of Kyle Field.  The back half of the schedule was not kind to MSU last year, and this year's didn't start off well either with a 34-16 loss last Saturday to South Carolina.  Will MSU be able to fight its way out of the season with bowl eligibility?  Can State pull an Auburn and sneak a win out of College Station?  We attempt to answer at least 42% of those questions and more, as we get your set for Saturday's CBS showdown between the maroon team and ah, the other maroon team.

With just three days until kickoff, make sure get all previewed up and ready for this weekend's matchup. Let us help you get prepped with our Matchups Preview, the Totally Serious Opponent Report, our Game Preview and a question and answer session with our friends at Good Bull Hunting.

For this section we'll have to throw out the tape from last year because if it's the same story, MSU got beat at every single matchup on the field. Total domination by the Aggies - a pathetic display of football by the Bulldogs.

With that out of the way - what do we have this year?

A&M's defense is considerably weaker. They are 11th in scoring defense (29.8) and 14th in total defense (443 YPG). Here are the point totals they've given up in SEC games this year:

Now, they've improved their PPG average considerably in the last two weeks going from nearly 34 PPG to just under 30. Granted last week's game was against UTEP who is nearly Southern Miss bad.

State needs to pound the ball, plain and simple. A&M is giving up 200 YPG on the ground - pound it. It doesn't matter who plays QB for MSU, our O-line can handle the job against this D-line even if it's Russell. The Dawgs have the running backs - we need to run it. Last week we threw eight more times than we ran it, that should never happen at Mississippi State.

Pray for a miracle? Johnny Football leads an incredible attack averaging 49 points per game. They will turn the ball over, however, and that is something State must have. A&M has 15 on the year. MSU hasn't been so hot forcing turnovers - 0 in the last two games, only 10 on the year (4 in SEC play).

Score on nearly every position (THAT INCLUDES THE SECOND HALF - WE HAVE TO PLAY IT) and get a few turnovers. Do that and we've got a chance.

The golden days of Texas oil production may be gone, but that hasn't stopped Texas A&M from playing a role in the larger energy landscape. A routine glance into the university's history, traditions and academics turned into something more when I noticed the presence of a conspicuous satellite campus on the A&M Wikipedia page. Yes, the Aggies have a branch in the oil-rich nation of Qatar.

But that's not all of A&M's ties to Big Oil. As it turns out, the CEO of Saudi Arabian Oil Co., also known as Saudi Aramco, is an A&M alumnus. The Texas oil barons of a bygone era pale in comparison to Saudi Aramco. The company is worth an estimated $10 trillion dollars, per Financial Times. It also owns the world's largest oil field. Johnny Football's autograph operations are a drop in the bucket, comparatively. Hell, even the SEC's television revenue is small potatoes compared to this company.

Being an engineering school, A&M does offer degrees in petroleum engineering. Noticeably, until last January, the department was led by an innovator in the field of hydraulic fracturing technologies. Stephen Holditch, in addition to his duties with the petroleum engineering program, also serves as a board member for Mattador Resources, a Dallas-based oil and natural gas exploration company.

There is plenty to be said about Saudi Arabia and Qatar's oil riches and the effects they have on the global energy supply. Questions also abound surrounding the environmental effects of society's current amount of energy use, causing global warming that could lead to some of the biggest challenges ever faced by humanity. Of course, there is still considerable debate over whether fracking can be done in a way that does little harm to the environment. But let's get to what's important here.

Is Texas A&M's rise to the upper-tier of SEC teams a product of Big Oil? Surely Mark Emmert, Mike Slive and Paul Finebaum will be investigating this soon, but for now, here are a few theories as to how the energy industry is fueling A&M's success.

We may never know just how Big Oil managed to propel A&M to last year's upset over 'Bama. The downside is the addition of a domestic and foreign oil-fueled powerhouse into the SEC West means another challenge every year for Mississippi State. The best hope for MSU at this point is offering agricultural expertise in exchange for oil. Until that happens, A&M's oil empire will remain a formidable opponent this Saturday at Kyle Field.

On paper, it looks like the Mississippi State Bulldogs will face quite the challenge as they face off against Texas A&M in the Aggies final game at Kyle Field in 2013. Installed as a 19-point underdog, Mississippi State will have to take advantage of a weak Aggie defense and hope to score enough points to beat Texas A&M in a shootout.

The Aggies have not scored fewer than 41 points in any contest this season. One of those was a last second win against Ole Miss, the other was a loss to Auburn. In their loss to Alabama, the Aggies scored 42 points. They will get their points, and there is not much a defense will do about it. In all they average 49 points a contest.

Through the air, Texas A&M is picking up 371 yards a game, good for sixth in the nation. They also run the ball for over 200 yards a contest. Mike Evans has been the big play receiver for the Aggies, averaging 22 yards a reception. Overall, he has hauled in 12 touchdowns and 1147 yards on 52 receptions. Manziel is the leading rusher on the squad, and he hurt the Bulldogs with his legs and arm in 2012. On the season, he has 96 carries for 564 yards and eight touchdowns. Ben Malena, who has 89 carries also has eight touchdowns to go with 456 yards.

While the Bulldogs will more than likely need to score 40 or more points to win this game, the Aggies have the defense that can allow such a score. They have the 80th ranked scoring defense in the country, giving up 29.8 points per contest. That average has been helped by UTEP (7 points), SMU (13 points) and Sam Houston (28 points).

In SEC play, the Aggies did shut down Vanderbilt by only giving up 24 points two weeks ago. Are the Aggies showing signs of life on defense? If they are, that will be a difficult challenge for the Bulldogs.

However, even with some shown improvement, the Aggies rank 99th against the run, giving up over 200 yards per contest. Through the air, things have not been much better, giving 242 yards per game, good for 82nd in the country.

Should the Bulldogs want to spring the upset, it could well come to turnovers. The Aggies will make a few mistakes, committing 15 turnovers this year. The Bulldogs have turned it over eleven times on the season, with five of those coming last week. If the Bulldogs can force one or two turnovers (something they have not done well this year), and capitalize on them, it may lay the groundwork for an upset. 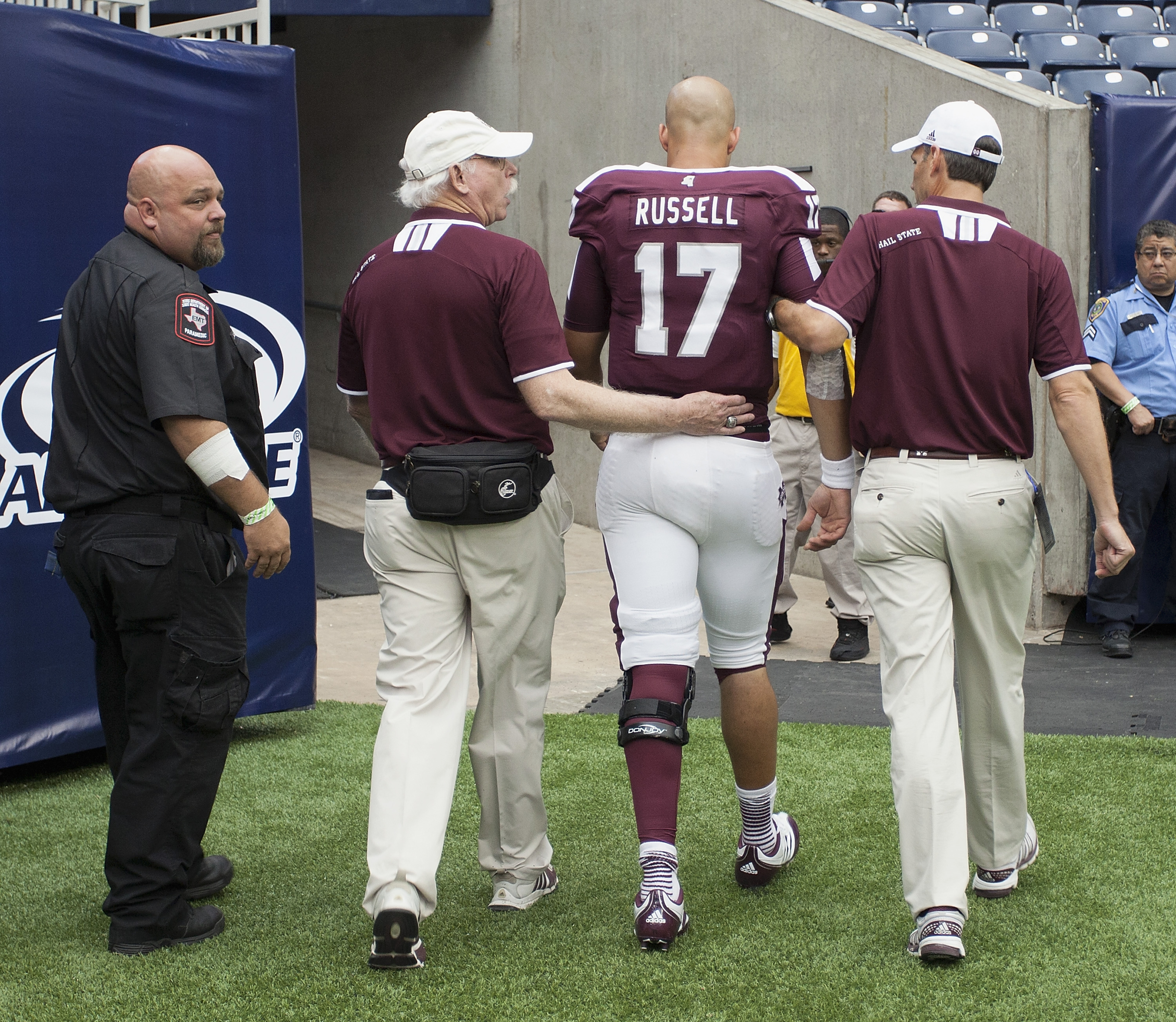 1) At 7-2 and with three games left on the schedule (two against top 10-ish teams), what are the best case/worst case scenarios for A&M in your mind?

Dr. Norris Camacho: Worst case, the defense forgets about all the progress they've made recently and we lose our last two against LSU and Mizzou to finish at 8-4 and a mid-tier bowl invite. That's what used to happen to us all the time, but this coaching staff is different. Best case is 10-2 and a BCS invite because RATINGS.

2) Be honest: is Mike Evans just a ridiculously good robot designed by the A&M engineering school? Where does he rank among the all time best at the position for A&M in your mind?

Camacho: we've already determined that Manziel is a robot, but there is no evidence at this time that a similar EvansBot exists. I think he's just really damn good.

ColoradoAg: He'll likely only exhaust two years of eligibility, but I'm ready to call him the best Aggie wideout of all time. He is going to be a bad ass in the NFL, too. We're lucky to have him.

3) What matchup are you interested to see between MSU and Texas A&M in Saturday's game?

Camacho: A&M's defensive line against MSU's offensive line. They've shown marked improvement lately, but the Bulldogs' OL is probably a little better than Vandy's and definitely a cut above UTEP's.

ColoradoAg: Like Camacho, I want to see the State offense against our D. Specifically, I want to see how the A&M handles the balance from MSU's offense.

4) Are you concerned with how the A&M defense matches up with MSU's offense given their struggles this year?

Camacho: I'm always concerned with so much youth on the field. Again, we're getting better, but we're not where we need to be yet.

ColoradoAg: Absolutely. If y'all can keep this close through 2-3 quarters, things could be interesting.

5) Would you be cool with this game becoming one where Jackie Sherrill is all time coach for both teams?

ColoradoAg: I'm insulted that the idea hasn't even been entertained. NCAA sanctions for all!

Camacho: 45-24 A&M. Manziel runs more than usual. Monopoly money rains down from the stands in his (probably) final game at Kyle Field.

ColoradoAg: 50-34 Ags. Our D has its fair share of struggles getting back into SEC competition. Manziel has his requisite 5+ touchdowns to help pull away in the second half. Hope all Bulldogs traveling to College Station have a blast. 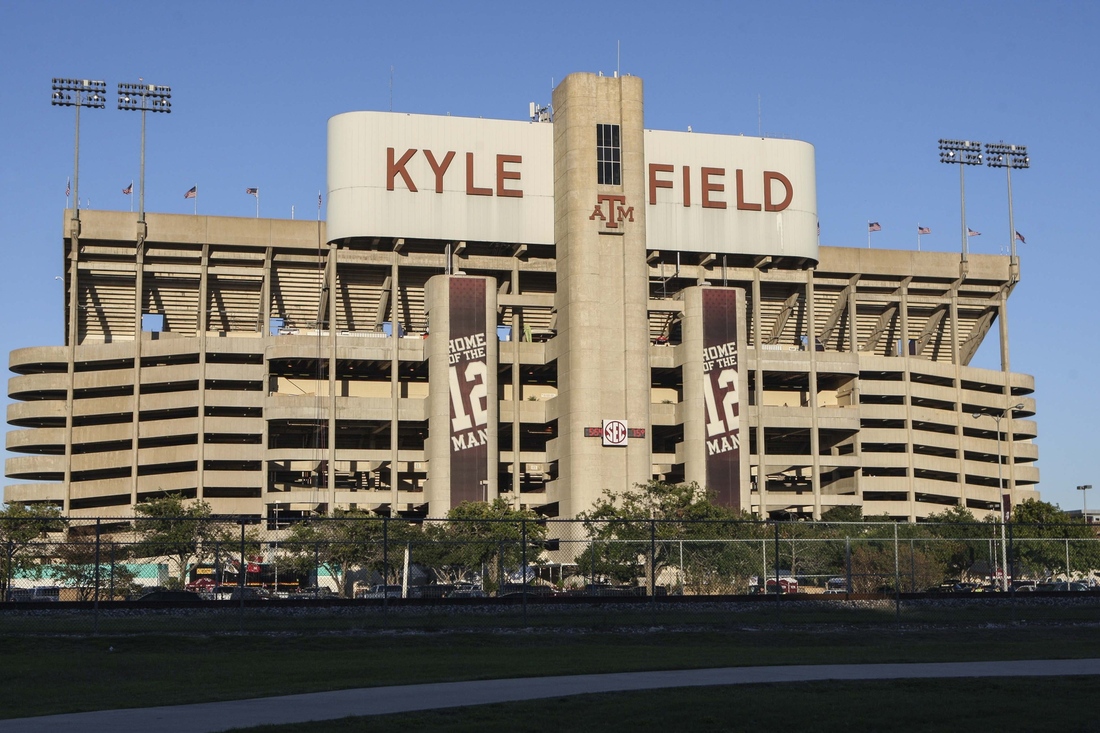 Kyle Field no doubt presents the toughest road environment that MSU has faced in 2013. Can the Bulldogs go into enemy territory and steal a victory? --Troy Taormina-USA TODAY Sports