MSU moves on in Nashville

All of the sudden Mississippi State has won 3 out of 4 games after losing 13 in a row. The Dawgs beat South Carolina 70-59 to kick off the SEC's first ever 14-team basketball tournament.

The Bulldogs did it behind excellent defense and sharp shooting. They forced 17 Gamecock turnovers and held them to 6 of 31 (19.4%) from behind the arc. Meanwhile, MSU shot 46.7% from three - 18 points better than their season average.

Tonight was the first SEC tournament action any player has seen. The only team in the conference with those circumstances

Last year, Stansbury couldn't get it done vs. a mediocre Georgia team with a boat-load of talent. This year, Rick Ray gets a win with six scholarship players, three true freshman and zero SEC Tourney experience.

I was one of the ones screaming last April when Coach Ray was hired that we should've been able to pay more for an experienced coach, one like South Carolina got in Frank Martin. They spent $2 million per year to get him to Columbia, while State brought Ray in for $1 million per year. Well, Rick Ray just beat him 2 out of 3 this year with his makeshift team. So, maybe I was wrong.

Fred Thomas had his best game all season. The true freshman stepped into the missing Jalen Steele's role and hit four treys. He ended the night with 21 points - and he added 5 steals in his defensive effort. For his performance, and the team win, only the highest flat top is appropriate... 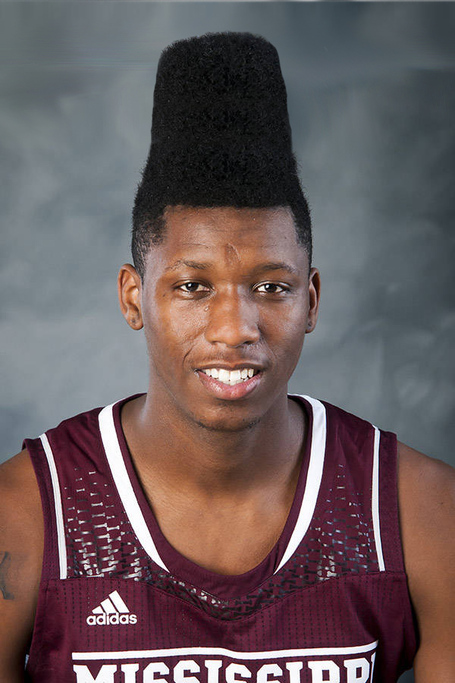 MSU will play Tennessee at 2:30 Thursday afternoon. The Vols are squarely on the NCAA Tournament bubble, so State will have a chance to play spoiler. No matter what happens - great showing in Game 1, and way to finish the year strong despite the odds, Dawgs. Hail State.