In an effort to use the highest possible rankings, we'll use the Collegiate Baseball Newspaper Poll: #3 LSU visits #8 Mississippi State this weekend..

Share All sharing options for: MSU vs. LSU Series Preview

SEC play starts off this weekend with a bang as the LSU Tigahs come to Dudy Noble for a three game set. If this were football we'd all be losing our minds over a top 10 matchup in Starkville - but it's not football, but huge nonetheless. These two fanbases care more about college baseball than any other, so we should be in for quite an atmosphere despite it still being spring break.

Last year, LSU took 2 of 3 in the regular season but State single-handedly eliminated them from the SEC Tournament come late May.

LSU is as talented as ever. So far this year they have had plenty of offense despite their two preseason All-Americans, 2B JaCoby Jones and C Ty Ross hitting in the low .200s. Baseball America's Aaron Fitt elaborates...

[Alex] Bregman's impact has been huge, but he isn't the only newcomer making waves in Baton Rouge. Freshman outfielder Mark Laird has emerged as a dynamic catalyst atop the lineup, leading the team with a .410 average and a .474 OBP, drawing eight walks and striking out just twice in 15 games. He also has put his exceptional speed to good use defensively, sliding from right field over to center field, bumping Chris Sciambra to a corner........third baseman Christian Ibarra, a transfer from Rio Hondo (Calif.) JC, has been the other big addition, hitting .358/.453/.491. Mainieri called him "an extremely skilled defensive player" who could also handle shortstop easily, and he does a great job staying back on offspeed pitches, allowing him to hit for average despite his exaggerated leg kick.

LSU has excellent pitching as well. They are led by the impressive weekend rotation of Aaron Nola, Ryan Eades and Cody Glenn. Perfect Game's Kendall Rogers on this staff..

[Nola and Eades] had incredibly high expectations placed on them before the season, but they've flourished so far this spring. Nola, who has gained 20 pounds since arriving at LSU two falls ago, has a 2.77 ERA in 26 innings, while also flashing a fastball up to 95, while Eades has been much more consistent this spring with a 1.80 ERA in 25 innings. He also has been up to 95 with his fastball, but most importantly, he's avoiding the mistake pitches that haunted him last season.......[Cody Glenn] hasn't disappointed Mainieri and LSU pitching coach Alan Dunn. He has an 0.73 ERA in 24 2/3 innings of work. He also has a unique arm angle, which creates more movement and deception on his pitches. Interestingly, Glenn was recruited as more of a higher velocity type of pitcher.

What I find so impressive about those starters is the number of innings they have logged. Each of them over 24.2 in only four starts each. With their excellent ERAs, they are holding the opponent down long enough to make sure their offense jumps on them. Mississippi State has struggled lately with getting starters late into games. Obviously Jacob Lindgren's injury couldn't be helped, but Evan Mitchell has barely made it out of the 2nd and 3rd innings the last few times out, and only has 15.2 IP this year. Getting some quality innings out of the starter, especially on Friday night, is key in saving the bullpen.

The rotation for MSU will once again by Lindgren (assuming he will be able to pitch) on Friday, Evan Mitchell on Saturday and Kendall Graveman on Sunday. If Lindgren is unable to start, or even go very long, I'd expect to see Will Cox as the replacement. It looks like the Mitchell combo on Saturday will be one Coach Cohen wants to stick with due to Evan's electric stuff and Ross' sinker ball.

He's so much different from what you just saw from Evan Mitchell-we think they complement each other well. - John Cohen

Sunday is St. Patrick's Day, so the Dawgs will be festive and wear these green hats.. 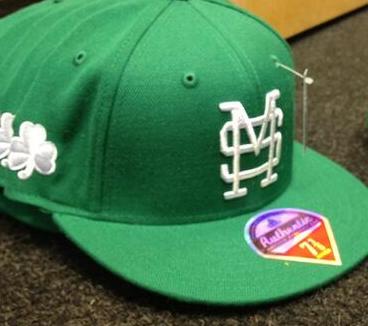 This looks like a big time matchup between two teams that don't have many holes.

So, let's pack out the Dude and see what we've really got this year. Hail State.