A full, and I mean FULL, look at the results, pictures, stats, national overview, and everything else EA Sports foresees for MSU's 2013 season.

It's here folks. The day is finally upon us. Christmas in July. The oasis we've been imagining as we wander the desert. Our salvation from the hot mess that is summer

Like I imagine most of you did, I went out today and purchased my copy of the latest edition of our annual savior from the long, dull summer: EA Sports' NCAA Football 2014. Now, before I started blogging, my primary objective would have been one of the following:

HOWEVER, since some of you didn't get the opportunity to go get the game today, my first objective is to simulate multiple seasons, and share those results with you all. I will also give you a look at MSU's roster, jerseys, a look at Davis Wade, my thoughts on the game, and more, probably tomorrow. If EA Sports keeps up its run of roster mishaps, then I might even do another post just on the mistakes they have. Nevertheless, enough of my yapping; let's take a look at what EA Sports simulates MSU's 2013 season results to be. 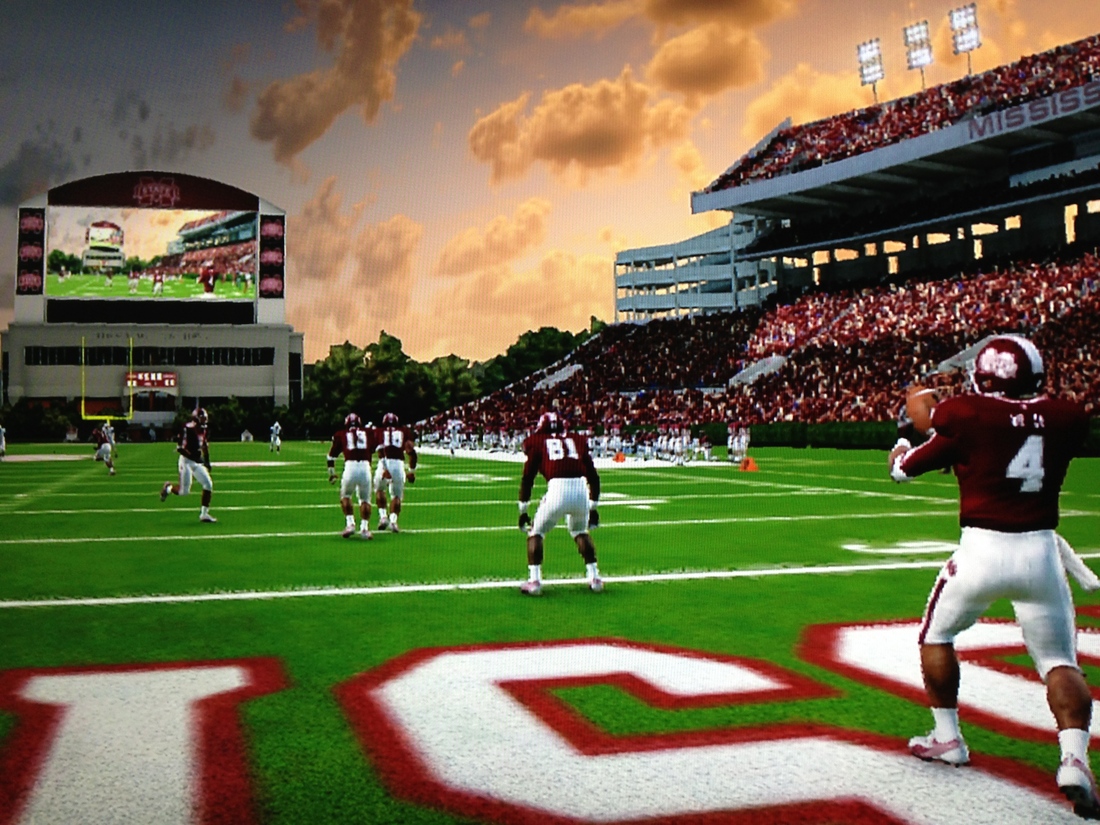 So how did we do?

The idea to do five simulations (CRAZY) came after reading WarBlogle's review of Auburn's season on the game. After reading his more thorough review, I couldn't just short you guys with ONE simulation, so I went ahead and ran five for good measure.

I will admit that in my rush to get through the first sim, I forgot to go back and record the scores of those five wins between Oklahoma State and Kentucky. I started to go back and redo the entire sim, but I figured giving you the scores for four out of five was still a pretty darn good effort.

In this one, I have to say that I was quite surprised by some of the outcomes -- not just MSU-centric, but dynasty wide. Taylor Martinez a Heisman winner? Johnny Manziel did finish second, and the Aggies did win the national championship, so I guess not all was completely out of wack, but... Taylor Martinez? I see you clownin, EA Sports.

On the MSU front, we got about what we expected out of MSU stats wise, with Russell and Perkins both having outstanding years. The receiving corps -- well, that was just a hot mess, in relation to trying to figure out who in the world the wide receivers were that they had listed on the roster. We'll delve more deeply into that tomorrow. For today, I'm fairly sure State's leading receiver was Ricco Sanders, who is no longer on the team, and I honestly have no idea who that #8 was. It says Senior from Biloxi, so if anyone can fill me in, I'd appreciate it. CHRIS SMITH BACK FOR AN EXTRA YEAR OF ELIGIBILITY? AND DID HE TRANSFER HOMETOWNS TO THE COAST? Anything is possible, I guess.

Ultimately, it was the #WeBelieve year all over again, except there were actually some good wins in the front half, and this time, State was able to whoop up in the bowl game, 2011 Gator Bowl style. 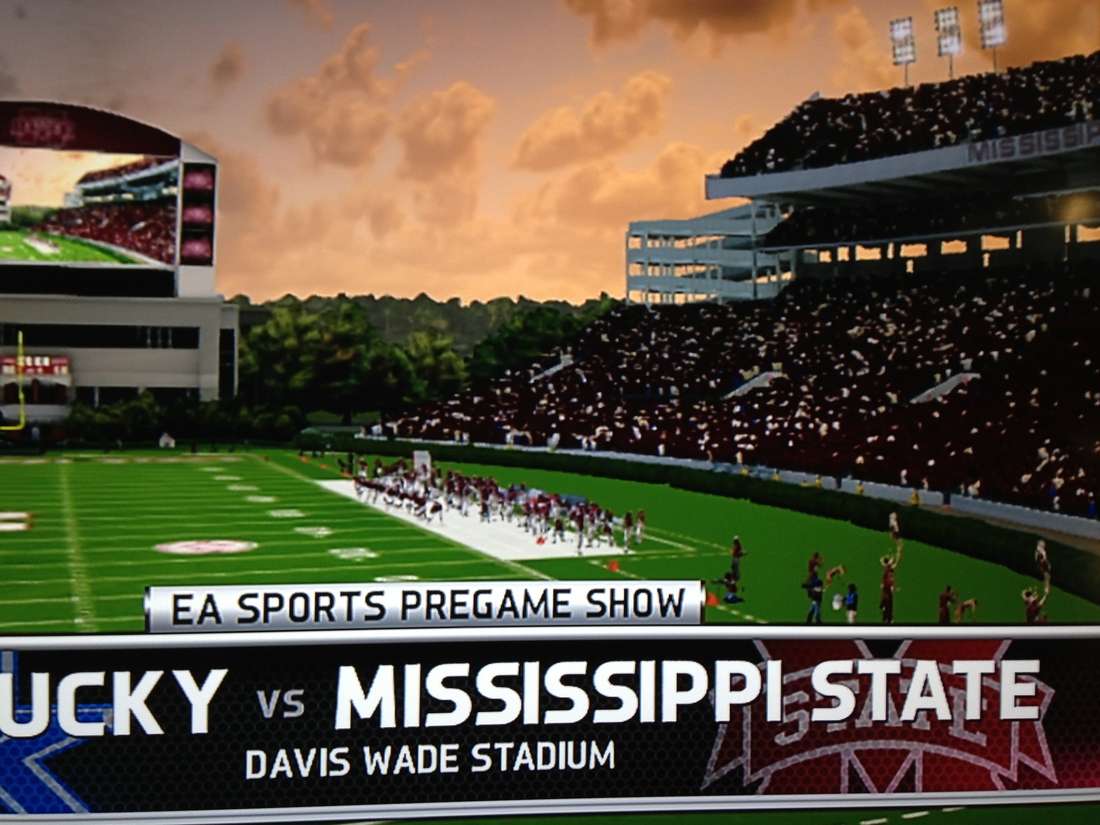 Sim 2 was MUCH more unkind to the Bulldogs, and brought the kind of disappointing results that some think the daunting schedule in 2013 might produce. State finished 5-7, without a bowl for the first time since 2009, which probably prompts all digital beat writers in the game to write a full off-season's worth of "IS MULLEN ON THE HOT SEAT?" columns.

Also, I SWEAR to you Ole Miss fans that I'm not messing with the sim there. State again beat the mess out of Ole Miss, but this sim saw the Rebels go to a bowl at 8-5, while State stayed home.

To be perfectly honest, this simulation might be what many State fans would consider a dream season in 2013. State not only wins all of the games that they should, but they pick up wins against Oklahoma State, LSU (first time in two decades), Texas A&M (at A&M), while narrowly missing wins against South Carolina and Alabama. Realistically, State was two touchdowns away from being 11-1 with an outside shot at a national championship. And of course, their only loss still would have been to?.... Ole Miss. NCAA Football knows how the rivalry works, indeed.

In addition to a 10-win season, Tyler Russell basically took all his 2012 records, put them in a barrel out back, and lit them on fire in this simulation. Russell blew his single season passing yards record out of the water by nearly 500 yards, and he bested his TDs record by five. But Russell wasn't the only record breaker for MSU this season, as now-fictional MSU WR Ricco Sanders broke a few records himself, besting previous records for receiving yards and TDs in a single season. My goodness, the air attack was in full gear in this sim (fans self).

Sim 4 was a bit more believable than Sim 3, with almost the same results, record-wise. State opened the season with a strong win over Oklahoma State, but couldn't break the LSU streak in game five. MSU would go into Columbia and grab a win, but took bad losses to Texas A&M and Alabama in back-to-back weeks before finishing with two good wins over Arkansas and Ole Miss, gaining an invite to the Cotton Bowl. Don't get me wrong, I'm not saying that I assume State will lose badly to Texas A&M and Alabama this year, but those are two elite teams, so it's not out of the question if State goes in flat. A win against South Carolina is doable, although the maroon and white will have to play their best game there to keep that two game losing streak from turning into a three game one.

Stats-wise, it looks like Tyler got hurt sometime about mid-year. Dak filled in nicely though, putting up 1,230 yards and 11 TDs of his own. Yet again, Ricco Sanders led the way in receiving, while LaDarius and Josh split a good chunk of yardage in the rushing game.

Okay, so while this wasn't the BEST of the five years, it did feature a win over Alabama, which is huge. Of course, in true MSU fashion, State lost to Arkansas and Ole Miss following that huge win, as only State could.

On the stats side of things, Tyler had another smaller year, but I think this time it was just because he split reps with Dak again. Perk and Robinson split carries for another solid duo year, and again the same three WR/TEs led the way in the receiving department.

One thing that I did want to note about this season: HOLY CRAP DENICO AUTRY. I have no clue how he didn't win a national award for that, but he didn't. Still, that is unreal. Way to finish off the career, Denico. 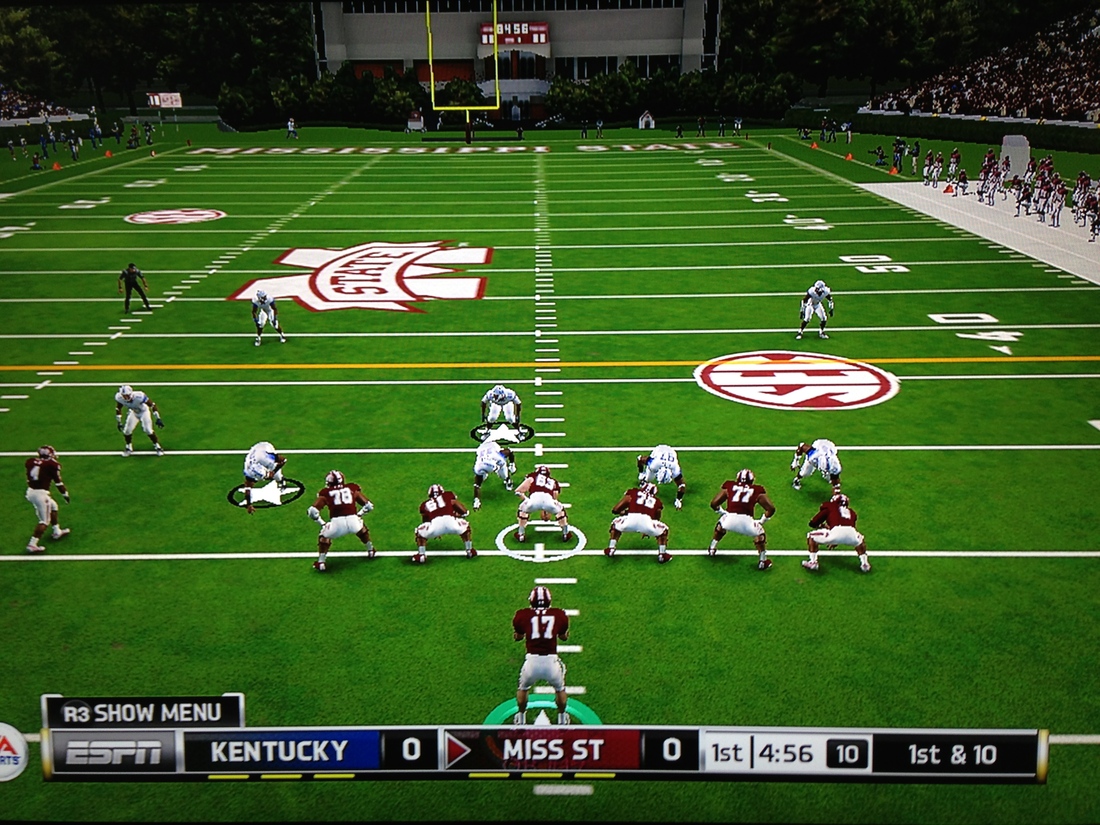 After I finished up the simulations, my first thought was that I should have made some tweaks before starting. If I could do it over again, I possibly would have deleted Ricco and Chris Hughes from the game, to get a true sense of what this team's results might be this year. But then I thought about how many players are probably different, ranked too low, ranked too high, or are placed in the wrong position, and I realized that for simulation's sake, I think it turned out just fine. I definitely wasn't going to go in and tweak every single player to my liking. Nope, not going to do it.

Overall, can you really be upset with those results? I know I can't. In five simulations, State went to four bowls, was able to beat several tough teams on their schedule, broke some records, and made waves on the national front, even if there weren't any surprise 12-0 seasons in there. Are these results a bit inflated? Probably so, but isn't that what summertime is all about: over-inflating our expectations for the upcoming season? I say yes, and in that regard, EA Sports gets it spot on for MSU in 2013.

If you're an NCAA Football fanatic like me, make sure you come back by tomorrow as I will touch on the roster mistakes in the game, the MSU alumni that you can get and play with on the game, as well as a look at Davis Wade and the jerseys included on this year's game.