Last time: No Henderson for Ole Miss = loss in Starkville. This time: Marshall is back in Oxford = tough one for Mississippi State? This 249th meeting of both schools could be interesting.

Mississippi State (13-5, 3-2), who comes off a solid win over Auburn at the Hump Wednesday, can continue their upward swing today when they travel to Oxford to battle the Rebels (13-5, 4-1) in the rowdy Tad Pad at 3 p.m. The Rebs took care of Vandy at the mega weird Memorial Gym 63-52. No half court, buzzer-beaters occurred though. Dangit.

State beat the Rebels at The Hump on the 11th of the month 76-72. Can MSU finally sweep this season? They've done it eight times in the last 20 seasons. The Bulldogs have actually won more games (43) in Oxford than any other city outside of Starkville. Overall, the they've have won 23 of the last 31 against the Rebs. MSU leads the series 141-107.

State has held its own in the SEC thus far. They're 2nd in the league and 26th nationally with 8.9 steal per game. MSU has recorded 10 or more steals in eight games. The defense makes games sometimes look ugly but that is what Rick Ray wants... ugly and a win. Sophomore guard Craig Sword is 5th in the league with 2.1 steals a game and 4th in shooting percentage (.524). He's also scored in double-digits 15 times. 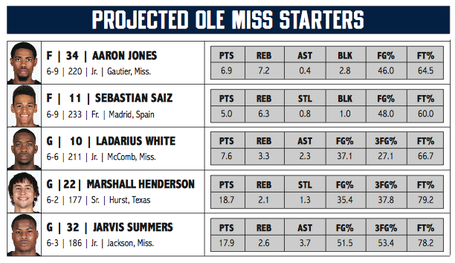 Andy Kennedy (186-105 overall career record) will also have a defensive game plan today. The Rebels have blocked 127 shots this season, leading the SEC and ranking 3rd in the nation with 7.1 per game. As far as points, Marshall Henderson leads the SEC and ranks 2nd in NCAA averaging 4.33 trey balls per game. He's hit beyond the line a school-record 51-straight games.

Be sure to catch Dave Baker doing play-by-play and Daymeon Fishback taking care of the analyst duties on SEC TV. Check out Sirius 108/XM 200 if you pay for that expensive radio stuff. The Twitters seem to keep things interesting, too.