Look, somebody needed to say it, Texas A&M and its fans are probably a cult and here's proof.

Google says that a cult is "a group of people having beliefs or practices regarded by others as strange or sinister." You might be saying that Texas A&M is not a cult and that they're just like any other SEC fan base and I would agree with that statement to a certain extent but the Aggies of Texas A&M have rituals, chants, symbols, yells, and handshakes that would make the Freemasons proud. Are the intentions behind these traditions sinister? Well, no, probably not but they're definitely strange. Let's just take a look at a few of these cult-like Aggie practices.

Yell Leaders: If you don't know, the Aggies don't have cheerleaders, they have yell leaders. Yell leaders are guys who stand in front of the Aggie student section and direct the crowd in Texas A&M, farming, and Texas Longhorns hatred-related chants or "yells" as they call them. And I swear this is 100% true, the yell leaders begin each yell by screaming "HUMP IT, AGS!" and then the students bend over in a bowing position and start to chant. Seriously, look it up. 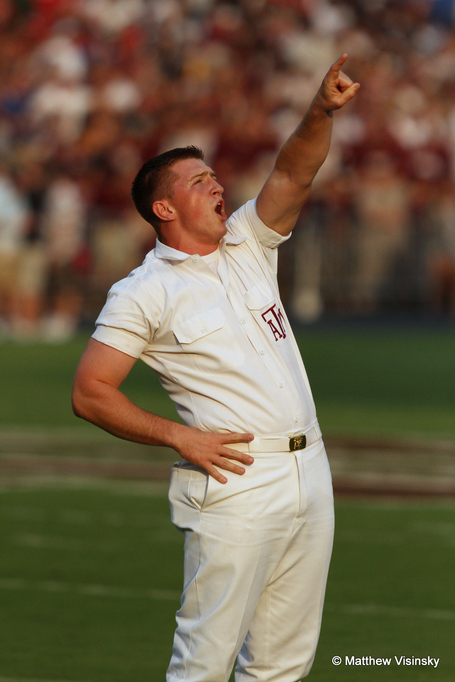 I'm not sure about you, but I don't know if there's anything more cultish than a large group of people bowing down to and being led in chants by men dressed in all white.

The Aggie Ring: You and I most likely received regular class rings when we graduated from college if we got any kind of graduation-related jewelry at all, but Texas A&M grads receive the Aggie Ring. What is the difference between the Aggie ring and the regular person's class ring? Well, here's a direct quote from Texas A&M's website to explain: "Aggies around the world recognize each other when they see the ring and greet each other as friends."  Hey, you know who else wears jewelry that identifies the exclusive society that they're apart of? CULTS, THAT'S WHO! Just ask Jay-Z and Dr. Dre, they're both in the illuminati, they'll tell you this is true. 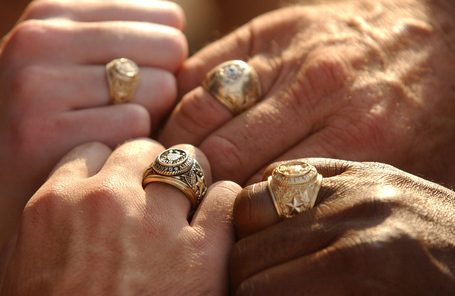 Every person who receives the Aggie Ring also has a "ring dunk" where you drop the ring in a pitcher of warm beer (it has to be warm for some disgusting reason) and drink the whole thing as some kind of initiation, as if the whole four years of college wasn't enough.

HOWDY!: Texas A&M's website states that ""Howdy" is the official greeting of Texas A&M. The university is known for its welcoming attitude and for making sure no one who visits the campus feels like a stranger. (People) tell stories of looking lost only to have an Aggie walk up, say "Howdy," offer to help and, to their amazement, walk with them to make sure they arrive at their destination."

This seems nice on the surface but if you know anything about cults, this is one of the main tactics they use to draw people into their world of twisted ideology. They bring in lost people with kindness and then brainwash their helpless SEC football-loving brains.

Also, and again I kid you not, saying "Howdy" accompanied by a handshake is called "whipping out." Usually in a situation where a person is lost and a stranger greets them by whipping something out, that lost person is either never seen again or presses charges for sexual harassment.

Wildcat: Finally, there's the "Wildcat" which is described as an "Aggie expression of approval." It's kind of like "Roll Tide" except way more complicated and weird.

It's difficult to explain but basically, each class has it's own "Wildcat" which is a yell accompanied by a gesture. The breakdown by class is as follows:

Here's a clip of a YouTube video I found made by a guy who's mother is presumably behind the camera (because he has no friends) demonstrating all four "Wildcats":

Yep. That's what they do at Texas A&M to "express approval" and here's my favorite part about the Wildcat: if an underclassmen does the Wildcat of an upper class (more specifically a freshman or sophomore says "whoop!") in the presence of an upperclassman, the older person can make the underclassman do push ups.

This, admittedly, is pretty awesome because who hasn't wanted to force a stupid freshman to do push ups? But it's still a convoluted and overly complicated tradition.

So, there you have it. Have I convinced you that Texas A&M is a cult yet?