Today in MSU History: A Tornado Hits the SEC Tournament

A game-tying 3 that saved lives. A tornado. Games delayed. Venue moved. And the worst team in the SEC went on a 4-day winning binge. The oddest SEC Tournament ever.

Share All sharing options for: Today in MSU History: A Tornado Hits the SEC Tournament

Turning down a chance to go to the 2007 SEC Tournament is a decision I still regret.  That was the year Jamont Gordon hit the game-tying 3 against Kentucky and State won in overtime - one of the most memorable games from my years as a student. In 2008, I wasn’t going to make the same mistake.  So we drove to Atlanta.

Alabama led most of the 2nd half, but a late 7-0 run gave State the lead with two minutes left.  Clinging to a three point lead with 7 seconds left, Barry Stewart was on the FT line.  Make it, and we win.  Miss it, and Alabama has a chance to tie.

Stewart missed, and Alabama inbounded with 2 seconds left.  Despite good defense by Ben Hansbrough, Mykal Riley hit a DEEP three and sent the game into overtime. 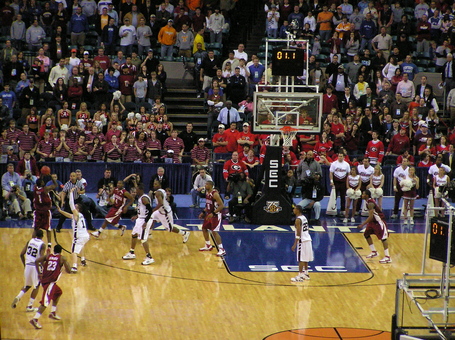 Three minutes into OT, State was up 64-61 with Alabama headed to the free throw line.  And then I heard a train pass by.  And it was quite loud - it sounded I was underground at a subway station in New York, or eating next to The El in Chicago.  Then, the jumbotron and speakers started to sway side-to-side.  And it hit me – Atlanta doesn’t have a train.  And if it did, I certainly wouldn’t hear it in here.  Panels on the inside of the opposite side of the Georgia Dome began to come loose.  Fabric flopped down onto empty seats below.  Players, coaches, and refs evacuated the court.  Fans fled to the concourse.

Eventually, we learned that a tornado had just passed over us, and we were treated to this view for the hour-long delay.

Around 11:00 PM, State finally closed out overtime with a 69-67 win.  Jarvis Varnado blocked the potentially game-tying layup with 2 seconds left.

In the parking lot, pink debris from the roof of the Georgia Dome littered the ground.  Around town, windows were blown out of hotels and conference centers, and trash was scattered in the streets.

That night, the SEC Tournament was all over the news.  National media was talking about Mykal Riley’s three that sent the game into overtime and how it may have saved lives, since everyone stayed inside to watch overtime instead of leaving and being caught outside in the tornado.

The next day, games were moved to Georgia Tech’s arena, and played in front of the slimmest of crowds – since everyone with a ticket couldn't fit, then they didn't let anyone in...  Georgia, boasting a 4-12 SEC record and the East’s #6 seed, won twice on Saturday – against Kentucky and then against Mississippi State.  And on Sunday, they beat Arkansas to win the SEC Tournament.

And though I missed Jamont Gordon’s heroics against Kentucky in 2007, I still ended up seeing a game-tying three, a State victory in overtime, and an extremely memorable game in the craziest SEC Tournament there ever was.