MSU will travel to Tuscaloosa to face the Crimson Tide in November. Can the Bulldogs upset Saban's evil empire in 2014?

The 2013 Alabama-MSU game was painful. Bama had arguably their worst game of the year in Starkville. A.J. McCarron threw for only 187 yards and had two interceptions. The Tide turned the ball over another two times in addition to the interceptions but Bama still won 20-7. Dak Prescott was injured and Tyler Russell just couldn't produce enough offense to beat the Tide. It truly hurt to watch.

State has now dropped six straight to the Gumps and 2014 will be as equally tough as the last six. To boot, the game is in Tuscaloosa but if we learned anything from the 2013 season, Bama is beatable so let's take a look at how the Bulldogs will stack up against the Tide.

After three swoopy-haired years of AJ "Game-Manager" McCarron, Nick Saban is looking for a new QB who can hand the ball off as effectively as AJ did. A starter is yet to be announced but the QB battle has seemingly come down to FSU transfer Jacob Coker and senior dual-threat Blake Sims. Since Nick Saban has never and most likely will never use a dual-threat quarterback, I'm just going to assume Jacob Coker will be the starter. But honestly, whoever starts at QB for Bama really doesn't matter at all.

The majority of Alabama's offensive strength will come from its running backs. Junior T.J. Yeldon and sophomore Derrick Henry were both on the preseason short-list of potential Heisman Trophy winners. These guys are good and will probably be the best one-two punch at the running back position in the SEC behind Georgia.

Bama's receiving corps will be excellent as well with the return of Amari Cooper who amassed 736 receiving yards in 2013. Alongside Cooper, seniors DeAndrew White and Christon Jones are both talented wide outs and per usual, there's a stockpile of other five-star freshmen who can step in if any of these players get hurt or aren't getting the job done.

The Tide's offensive line returns three starters and will be solid as well. In short, Bama's offense is going to be good. Hopefully their offensive coordinator, Lane Kiffin, will show the same amount of total incompetence that he did during his time at Southern California and will drive their offensive production into the ground.

Defense has always been Nick Saban's pride and joy and in the last two games of 2013 against Auburn and Oklahoma, they got absolutely scorched. All year long their pass rush was not nearly as good as it had been in the past and some key starters like Butkus Award winner C.J. Mosley and safety Vinnie Sunseri, left for the NFL or graduated during the offseason. But this is Alabama so obviously they've reloaded for 2014 and will most likely be just as good if not better than last year.

Senior linebacker Trey DePriest will be the defensive leader. Junior Denzel Devall and senior Xzavier Dickson will fortify the pass rush and EMCC transfers D.J. Pettway and Jarran Reed will also be key players in the Tide's defensive line rotation.

The secondary still looks like to be the weakest part of the Tide's defense. Junior safety Landon Collins is ultra-talented and will lead the secondary unit but past Collins there's not many notable players to speak of.

Nick Saban's greatest weakness as a coach seems to be recruiting quality kickers. I'm not sure I've ever seen more of a headcase than Cade Foster in 2013. Foster made 12 of 17 field goals last year and infamously missed three field goal attempts in the Iron Bowl. Though, I really don't blame him for not feeling very confident after Alabama fans sent him tweets like this: 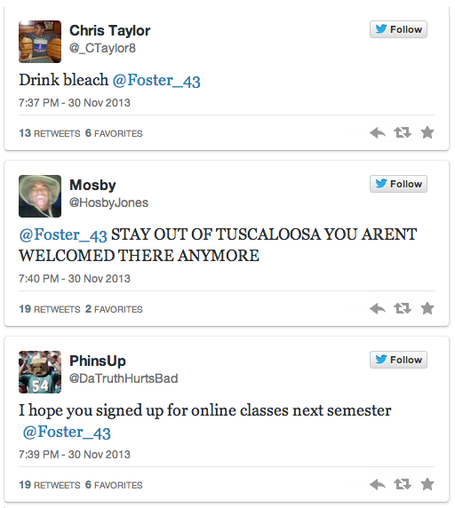 Supposedly, sophomore Adam Griffith is the capable replacement for Foster but we'll see. I guess making light of Alabama's kicking situation is a little hypocritical since MSU's kickers have historically been mediocre at best but it's Bama's only real weakness so, throw me a bone here. Also, there's never a bad time to showcase how crazy Alabama fans are.

Don't count us completely out

Yeah, Alabama is good. Yeah, MSU hasn't beaten them in six years. But State's offense and defense are both going to be better than they were last season and given a little bit of offense, MSU could have beaten Alabama in 2013. I'm in no way telling you to bet your mortgage on MSU but it could be a trap game for the Gumps since its the week after they play LSU. All I'm saying is that I won't be surprised at all if the game is close at end. Do with that what you will.