We need to stop the apathy and have confidence in the Bulldogs.

Yesterday I posted an article showing stats about Southern Miss' last two football seasons. If you didn't read it, it was not exactly complimentary of USM football. The piece was met with ire from Southern Miss fans, which was to be expected, but, to my surprise, it also received a good amount of backlash from MSU fans. People called what I wrote "arrogant", "tacky", and "classless". While I stand by the opinion that those claims are a bit of an overreaction to the piece, I understand where they come from. It was not the most tasteful article I could have written about USM and to anyone who was truly offended I apologize.

With that said, the main purpose of this response is to specifically address the overall attitude of many of the MSU fans that commented negatively about the article. A number of people stated things with the general mindset of "MSU has had a lot of bad seasons so we can't say anything bad about our opponents."

One comment in particular was extremely concerning and has since been deleted by the user who posted it but it shocked me so much that I saved a screen cap of it. Here it is (I omitted the author's name because I'm not trying to embarrass this person): 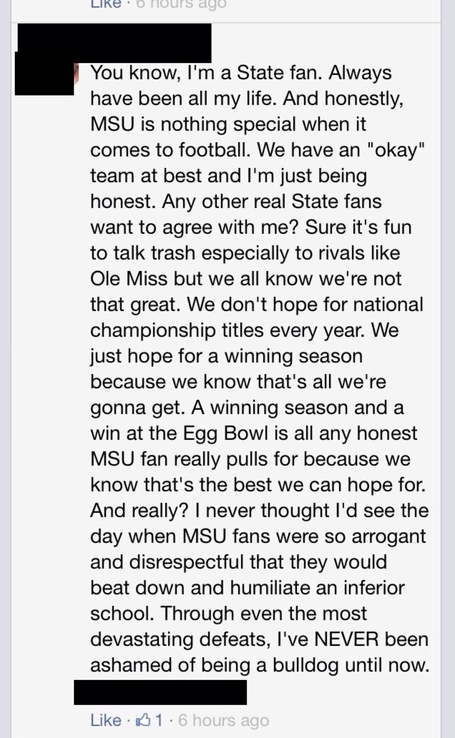 This person was not the only fan to post something similar to this but this example was by far the most plainly spoken.

I'll be the first to admit, perhaps yesterday's post was somewhat out of line and certainly there is a large portion of the fan base that does not feel the same as the individual above but I'm here to say that this attitude of apathy needs to be completely eradicated from the MSU fan base. It's a poison that takes away the confidence of not only the fans but, more importantly, the players and coaches as well. To put it simply, in this case arrogance is good.

This is not to say that being mean and hurtful is good, obviously it is not, but arrogance and confidence are essential elements in the formula of a winning college football program. It is possible to be a classy, respected team and fan base and have an air of confidence, pride, and even arrogance. Teams that win and fan bases of teams that win are often arrogant and they deserve to be.

If MSU fans continue to have the attitude that we can't brag or be arrogant towards opponents other than Ole Miss because there's a possibility that we might lose or that we've lost to them or other inferior teams in the past, we will never be a consistently winning program. It's a simple formula: Arrogance is a product of confidence and confidence breeds winning.

If you do not agree with me yet, let me provide a few examples:

James Franklin is an arrogant, overly confident coach but he wins. Though, not only does he win, he wins at places like Vanderbilt who has a longer history of cellar dwelling than MSU.

Steve Spurrier is arrogant and constantly mouths off to the media about other teams and coaches. He's also the winningest coach in the history of both South Carolina and Florida's football programs.

Butch Jones took over a Tennessee team that hasn't had a winning season in four years and with confidence and bravado brought in a top 5 recruiting class last year.

The SEC as an entire conference is arrogant. We win at everything (except basketball) and we'll tell you about it and so will ESPN.

Even Dan Mullen is arrogant. The man put up billboards around Mississippi that said "Welcome To Our State", and we've beaten Ole Miss four out of the last five years and just finished a sweet stadium expansion. I could list a hundred more examples too.

The point is, arrogance wins.

It may sound harsh but it's the truth and there's history to back it up. The nice guy doesn't win in SEC football and apathy certainly doesn't win at anything at all. There's no need to dwell on things like the loss to Maine or Sylvester Croom's tenure or any dark part of MSU's past. Let's drop this victim's attitude and stop thinking that just because we haven't historically had an elite program that it won't ever happen. Let's believe that this year's team can win the SEC West. Let's believe that this year's team can win a national championship. Let's believe in MSU football.  And if we have to be arrogant along the way, so be it. I'd rather be an arrogant winner than a courteous loser.