After a sloppy game against UAB, MSU needs its fans to respect the football gods that govern the Sun Belt. So revel in MSU's bizarrely scheduled road game at South Alabama and immerse yourself in the the state's only coastal craft beer.

Now that the South's yearly football orgy is fully underway, I am reminded how much I owe our broadcast overlords for educating me about what, where, and how to drink. Bland American lager is for house parties full of bad food, groups of dull-witted men, and young, vaguely attractive women wearing form-fitting football jerseys. Nationally available craft beer is to be shared with bespectacled hipsters at local rooftop dive bars or gastro-charcuterie-pubs. Sugar-laden "cider" and cheap, whimsically labeled wine are for outdoor dances, pool parties, or the back of an ornery apple farmer's flatbed. And the sophistication of blended scotch requires a suit fit for a secret bar where I'm likely to share a drink with Christina Hendricks, one of the Lannisters, or that one chick from Mallrats who always seems to use an American accent but is actually English or Scottish or Welsh or something.

This is, after all, how I know what's supposed to happen when I drink at the beach. Between neon yellow margaritas, I am to cram a lime wedge into a bottle of Mexican lager. Clothes somehow melt away and everyone around me is suddenly in their bathing suits and flip flops. The women all turn out to be about 15 pounds underweight and the men for some reason are as hairless as newborns.

"Pass me another lime, brah."

Thankfully, this isn't how they roll down in Fairhope, Alabama. 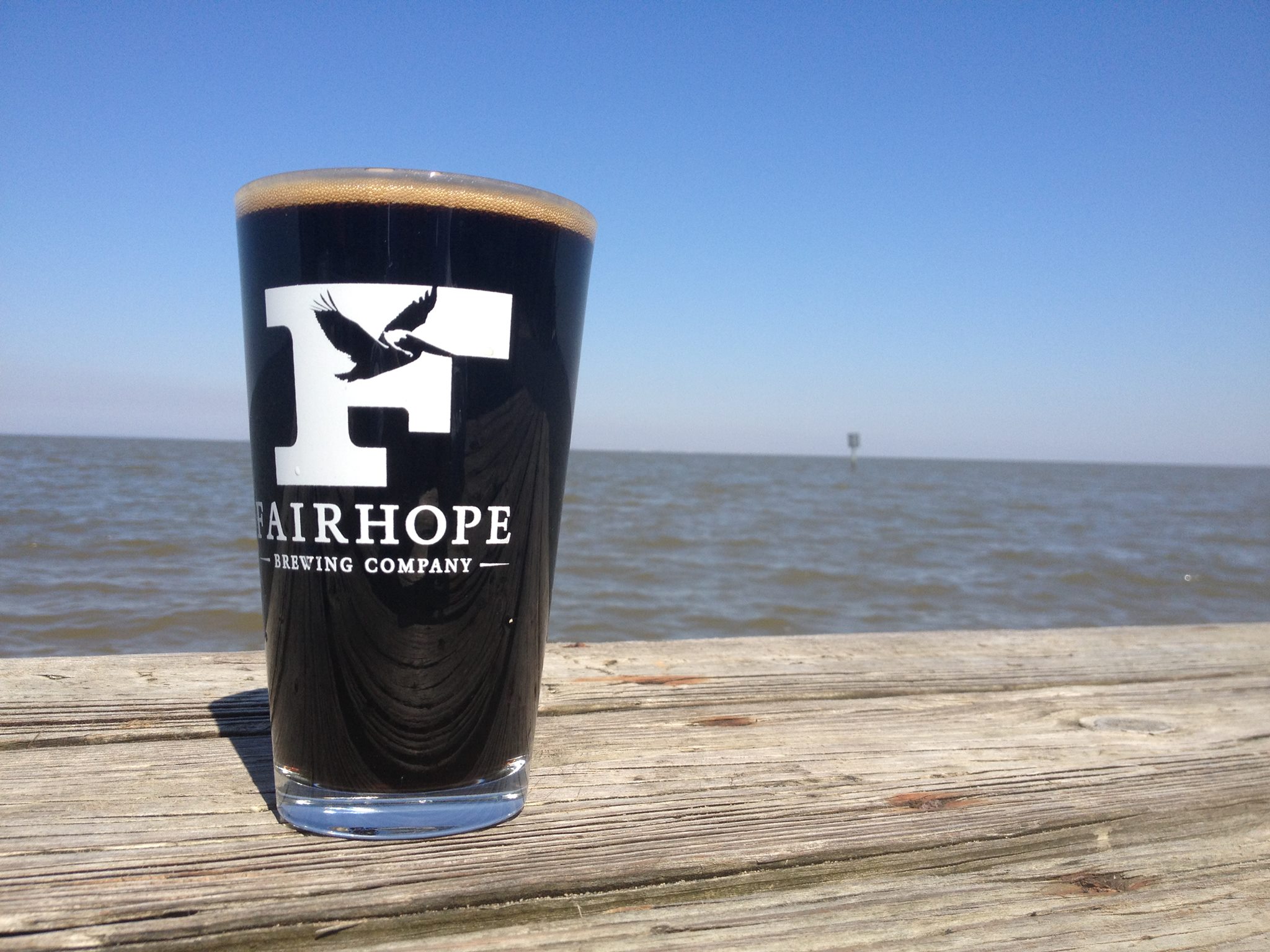 Fairhope is an idyllic small town around twenty-five minutes south of Mobile on the eastern shore of Mobile Bay. It has a mellow stretch of beach, a quaint downtown area with smatterings of New-Orleans-style architecture, and some of the best fishing and sailing the bay has to offer. The New York Times has called it "a refuge for writers, artists and iconoclasts, and for second-homers, retirees and young families," and Southern Living tabbed it as the second-best small town in the South a few years back.

Fairhope was also originally founded as a collectivist utopia by progressive "Georgists" that emigrated from Iowa in the late-19th century "to establish and conduct a model community or colony" by eliminating the private ownership of land.

But it is perhaps this unique history and novel character—the Times author went on to remark that Fairhope "has one foot dancing in the New Age, and one rooted in the Old South"—that has allowed coastal Alabama's lone brewery to thrive. In fact, the migration central to the story of the Fairhope Brewing Company echoes its namesake's, minus the focus on a land-value-tax-centered political philosophy, of course.

The story begins with two lawyers living in Alaska. (You know, the usual way stories about southern microbreweries start.) Brian and Michele Kane were recent graduates of Alabama's and LSU's law schools, respectively. While working in Juneau—which, believe it or not, is a place whose mystique draws the interest of a number of young lawyers from the lower forty-eight—the Kanes became enamored with the area's beer culture. The state didn't restrict the manufacture and sale of alcohol like the God-fearin' politicians did back home, so the new world of beer available to the couple was eye-opening.

Even though the Kanes were eventually drawn back to the South, their glimpse of the beer landscape that existed outside Alabama stuck with them. The atmosphere surrounding craft beer culture, which they regularly experienced firsthand at the Alaskan Brewing Company, was too good to just leave behind. So when Alabama's laws became more reasonable a few years back, the time was ripe—while tailgating at the "Game of the Century" in 2011, Michele declared amongst their friends that they should start a brewery.

Five field goals ensued. And there was much rejoicing.

Following Michele's announcement, the couple set things in motion, attorney style. They researched how to do what they wanted to do and composed a business plan to get it done. In the process, a few others jumped aboard to make the brewery a reality. Gabe Harris, an Auburn grad who led the "Free the Hops" movement we heard a little about last week, became involved. Alabama grad Dan Murphy, who was apparently a hero among Mobile's homebrewers, became the master brewer. And Jim Foley, another attorney produced by Alabama Law who had been following this whole escapade from its inception, signed on as a partner.

In February 2013, the Kanes' vision was realized—Fairhope Brewing Company was open for business. 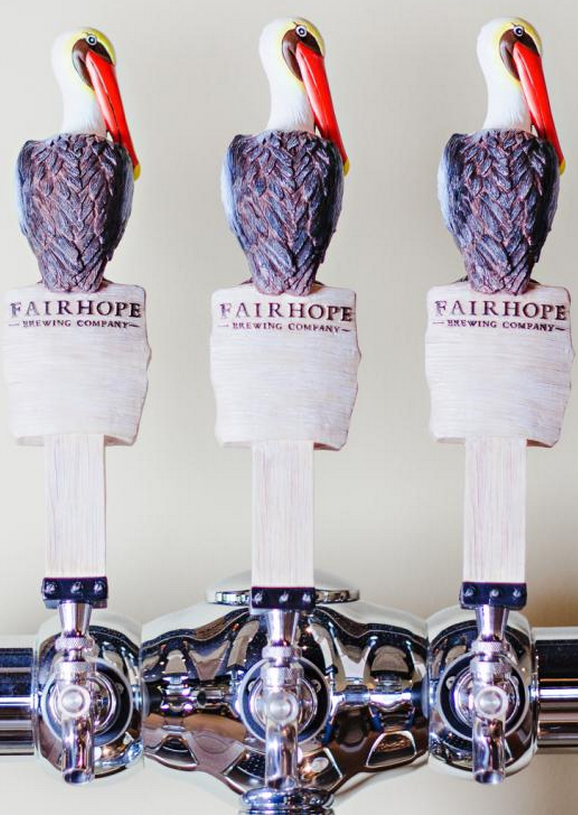 Q: How many lawyers does it take to open a microbrewery in Alabama?

As the state's only brewery within 150 miles of the bay, Fairhope Brewing takes its role as the Alabama coast's local brewer to heart. For instance, its year round lineup doesn't feature a cold-weather brew like a stout or porter. Instead, the darkest beer regularly on tap is "Painted Black IPA," which Jim described to me as "dark as night in color, but hopped up like a true IPA." It's "as light on your stomach as a beer can be," but still packs a punch at 7% ABV. Likewise, there's an light-bodied, low-ABV American Blonde "Everyday Ale" that is crafted to go perfectly with long stretches of fishing, people-watching, or whatever other beachside act of lethargy you choose. Coupled with the two other permanent brews on tap—"I Think Therefore I Amber" a "malt-forward" Amber Ale that is "approachable to the novice craft beer drinker, but complex enough [for the] beer snob," and "Fairhope 51," an American dry-hopped Pale Ale that serves as the company's "flagship" beer—Fairhope should have you covered for any sandy excursion you can think up.

Despite the brewery's relatively small size, it blesses its customers with diverse array of seasonal and extremely small-batch experimental brews beyond the four year-rounders. These products cover a broad range of styles and flavor profiles, so much so that the list is too long to recite here in full. But at the moment, these are the three "occasional" beers you can enjoy from Fairhope: a citrus-infused, American-style wheat ale appropriately called "S'Wheat Home;" "(Take the) Causeway IPA," which Jim calls "a true west-coast IPA" that's hopped constantly from start to finish; and, of course, 2014's version of "Football Saison," a "dangerously smooth" true-to-style saison that the company introduced during its first official football season last year.

Outside of its taproom in Fairhope, the brewery sells its beers all over Mobile Bay and the Alabama gulf coast. Other than in those places, your only shot will be in the Birmingham area, where the beer should be available at a handful locations. [Aside: If you've never been to Hop City in Birmingham (where you may find Fairhope's products) or Atlanta, you should go. Best selection of beers and ciders I've ever seen.] Plans are in the works for an expansion of Fairhope's distribution and potentially for a bottling operation, but that likely won't get in full swing until sometime next year. 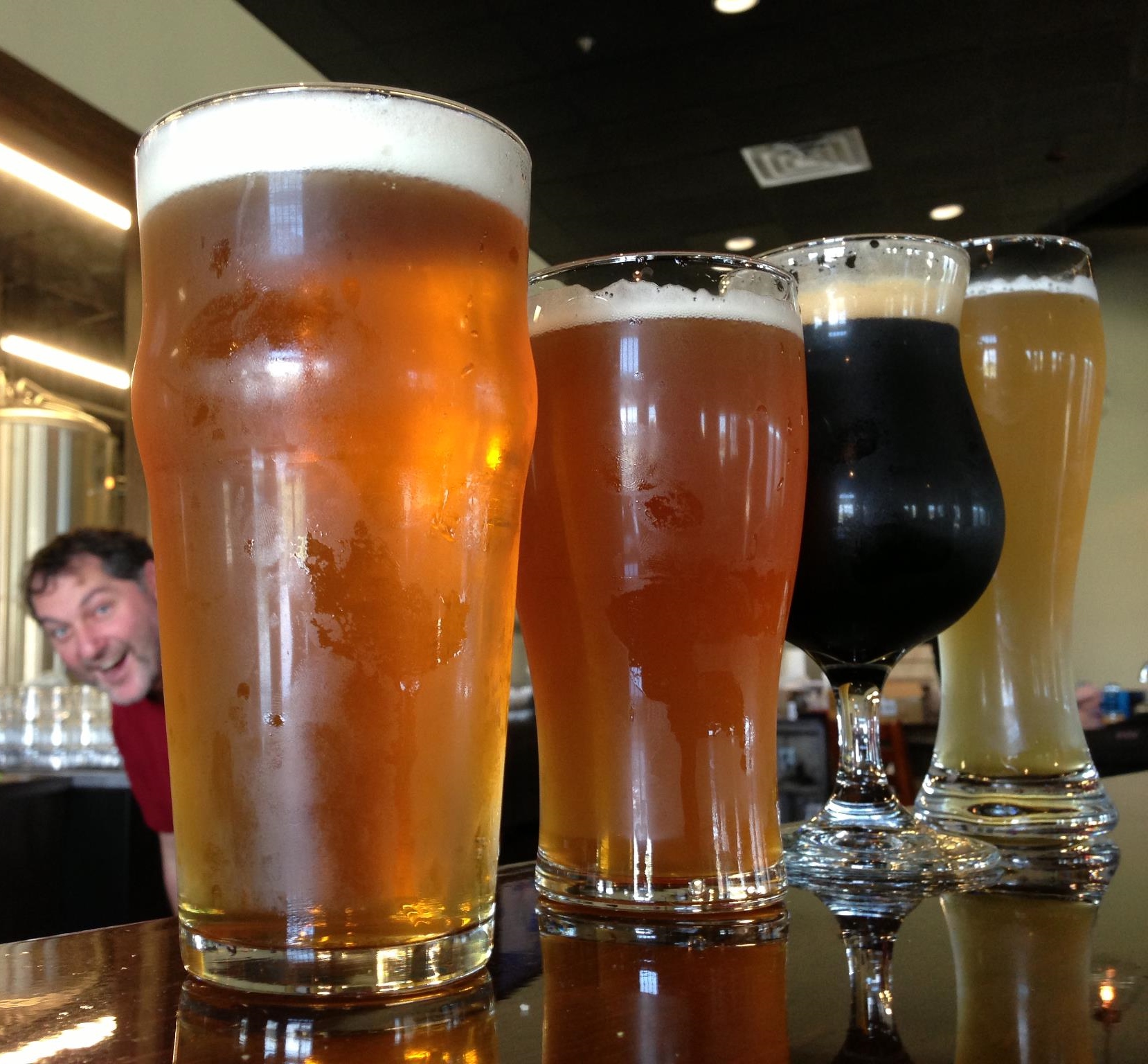 When you've got your own brewery, you too can photobomb your beers.

Being composed of Alabama, Auburn, and LSU alumni, the team at Fairhope Brewing is fairly representative of any group of co-workers in SEC country. But residing in the same community as the fledgling FBS program at the University of South Alabama, these beer-loving football fans have witnessed how a mutual love of quality football, mixed with a little adoration for an underdog, can give birth to a supportive and active fan base. The Jags of South Alabama thus serve as a blunt contrast to UAB, whose thirty years in Birmingham have yielded minimal community support. The program has only been around for five years, but is already averaging over 15,000 fans per game. It certainly hasn't displaced Troy as Alabama's central Sun Belt representative, but it may soon give it a good run for its money. (Troy, which first fielded a football team in 1909, averaged only 3,000 more fans per game last year than South Alabama.)

After earning six wins last year in its second season in the FBS, and finishing in a four-way tie for third in its conference standings, people around Mobile are buzzing. But don't take my word for it. I'll let Jim tell you about the unbridled enthusiasm surrounding the Jags' program:

Nobody predicted that South's football program would come as far as it has in as short of a time as it has. Being bowl eligible and managing to score 24 points against an SEC defense (Tennessee) [last season] is a huge accomplishment for a program as young as South's is. With that success has come a lot of local interest, and what is really great about having a football team in Mobile is that everyone around here can cheer for them—even if you also cheer for Alabama or Auburn or any other SEC team. As their program develops into a true power in the Sun Belt, so too will their local following. We are all truly excited about what Coach Jones is doing over there.

So when you head down to Mobile this weekend, be sure to pay homage to the football gods of the Sun Belt—who seem to be bent on bestowing their blessings upon South Alabama—by spending some time at Fairhope's taproom (which is open every day until at least 8:00 p.m. between now and Saturday) with a pint or three of local flavor. If this team's deities can bring Alabama and Auburn fans together, they can probably damn well do just about anything. Don't test their patience.