I've never been shy about bragging on Music Maker productions. The student group does an amazing job of drawing big names from pop, rock, rap, and other genres to come to a small town in the middle of nowhere to play for MSU students. But even as good as they are, there was a time when the biggest names -- and I mean the biggest -- played Starkville, and Mississippi State's Humphrey Coliseum. Tina Turner, Bruce Springsteen, Billy Joel, George Straight: these are seriously just a few of the dozens of names that Humphrey Coliseum hosted in the 80s and 90s. I can't remember if they're still there, but there was a time when you could go to Bulldog Deli (I will NEVER call it Peppers East or whatever) and see the concert posters for everyone that had played in Starkville at one time. But as big as all of those names are, they still don't quite match up with a man considered by some to be the greatest entertainer in the world: Garth Brooks. What? No, you can't be serious. Surely little ole Starkville couldn't draw a name as big as Garth, right? 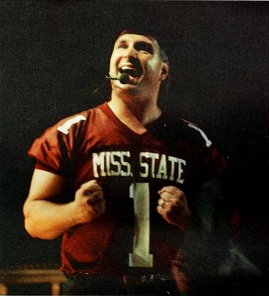 Believe it, boys and girls.

On October 8, 1992, Garth Brooks rose out of the center of the stage at Humphrey Coliseum, and exclaimed:

He then opened the set with his hit, "Rodeo". According to the Reveille, the show in Starkville was the first time Garth and his band ever played "new song" "That Summer" live, which of course we all now know as one of his biggest hits.

What's even greater than the way he started his show -- or just the fact that Brooks was there playing in a small town in Mississippi to begin with -- was the story behind how he ended up in the MSU jersey on stage. Here's how the Reveille tells it:

The highlight of the night was "Shameless," Garth's No. 1 remake of a Billy Joel song. During the instrumental bridge, Garth began unbuttoning his pink and black Western shirt. When he started singing again, he ripped it off and showed his brand-new MSU football jersey that Jackie Sherrill presented to him before the concert!

You can add Jackie Sherrill to the undoubtedly short list of men who have gotten Garth Brooks to take his clothes off. 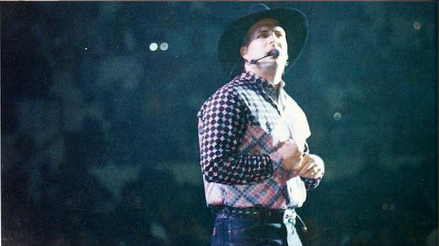 It's nice to know that even though we root for a team that isn't always the easiest to cheer for, at least we've been blessed with the opportunity to see a lot of good musicians and musical acts play in a town that normally wouldn't draw that kind of talent. It's also nice to know that as strong as the tradition of bringing in great acts was back then, it continues today for those I went to school with, those at MSU now, and those who will attend MSU in the future. And who knows: maybe the next Garth Brooks is on the lineup for next year's Bulldog Bash, or the following year's spring concert series. You just never know.

Photographs from the 1993 MSU Reveille and used with permission courtesy of the Mississippi State University Libraries, University Archives.