Share All sharing options for: 12 Days of MSU History for Christmas, Day 1: "To hell with Hitler, Ole Miss, Auburn"

We've touched on the success MSU achieved under head coach Allyn McKeen quite a bit here at For Whom the Cowbell Tolls in recent months and over the course of the last year or two. One of the most successful teams that McKeen had that often does not get talked about was the 1939 squad that went 8-2 but did not receive a bowl invitation.

That team's only two losses would be twin defeats to the two major schools in the state of Alabama: Auburn and Alabama. the first of those two was played in Birmingham, just a few months after the second World War had begun. Even though the MSU team did not wind up winning that day, they did win the award for best transportation to a game that day, as the Bulldogs added a little motivation to the side of their train: 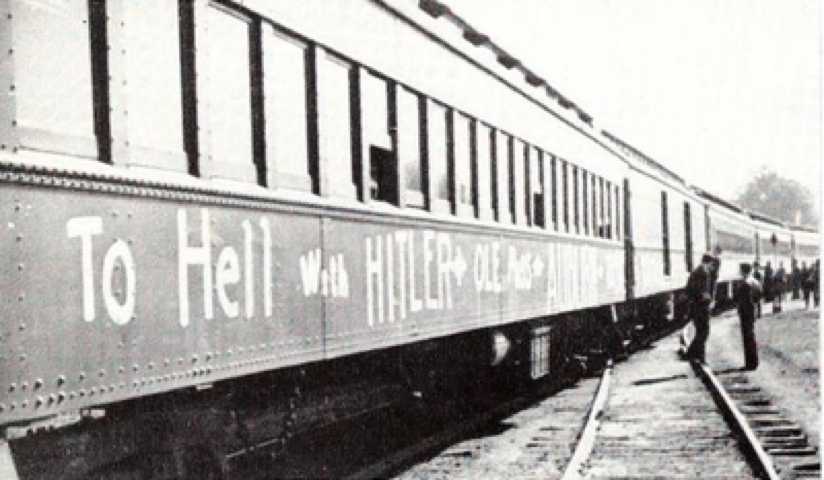 The best that I can tell, the writing reads "To Hell with Hitler, Ole Miss, Auburn..." There's more there, but I cannot make out what it is. Either way, it's pretty neat to see the Maroons supporting their country on the way to their game, all while getting in a shot at a rival, and the day's opponent as well.

[NOTE: I am assuming this picture was taken for MSU's trip to the Auburn game, although I cannot confirm that. It is from the 1939 season for sure, but which game it's for, that I do not know 100%. Although the Auburn game is a safe assumption, given that they're included on the inscription on the side of the train.]

Photograph from the 1940 MSU Reveille and used with permission courtesy of the Mississippi State University Libraries, University Archives.