Share All sharing options for: Here's a picture of Bill Cosby with the MSU pep band at the 1996 Final Four

Bill Cosby is awesome. Not that it needed clarifying, but just in case it did, there it is, in writing (everything on the internet is true, you may recall). And in 1996, the great Prince of Pudding made a special guest appearance with our own MSU pep band.

The pep band, as you know, was in New Jersey that spring for the Final Four, after MSU had gone on a magical run to make its first ever appearance on NCAA basketball's grandest stage. Everyone was through the roof with excitement as MSU had knocked off giants to get to the final weekend, so it's understandable that Bill would want to come by and get in on some of that fun. 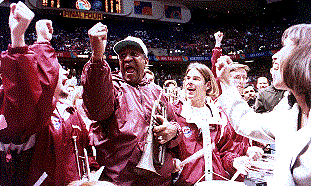 What a great photo

You know you're having a great year when the great Bill Cosby shows up to hang out with your pep band at the Final Four. It stinks that we don't have any footage of him potentially playing with the band. I like to think that, rather than playing an instrument, he led the dance team for a half or so:

If you are like me and you love to reminisce back to that year, then I would strongly suggest reading this write up by David Murray on the 1995-96 basketball campaign (also linked below picture). It's a great reminder of a year when State defied all odds, and almost all of basketball's great teams, to put together the best season in our school's history.