McWilliams' career was a great one, and even better, it was one of the more interesting and unique ones we've seen in MSU history. But that unique history was not without controversy, unfortunately.

Share All sharing options for: Shorty McWilliams and the 1946 Army-Mississippi State player controversy

When you research the record books for Mississippi State football, you'll most often notice that many records began being kept around the year 1946. And it is because of that chosen year ─ which fell just after the completion of World War II ─ that you might have missed the first year of Tom "Shorty" McWilliams career at Mississippi State. The back/kicker/kick returner, who gained his nickname as a joke aimed at his 6'3" frame, was an instant star at Mississippi State, being voted as an All-American and All-Conference selection in his freshman campaign in 1944. McWilliams was so good that one coach would even suggest that teams shouldn't schedule1 MSU at all as a means to stopping the ultra-talented Shorty.  Mississippi State won every game that McWilliams played in that year, losing only in games he was injured for against Alabama and Ole Miss, finishing the season with a respectable 6-2 record.  That season showed MSU fans and the rest of the country that Coach Allyn McKeen's team had a bright future so long as McWilliams was a part of it.

Shorty returns a kickoff from the endzone -- photo used with permission, courtesy of the Mississippi State University Libraries, University Archives

Unfortunately, McWilliams would not be a part of it for long.  As you know, the 1944 season was held in the throws of the second World War, a time in which many college aged young men had been called off to serve their country.  The 1943 football season was even cancelled entirely for this reason.  One might speculate that McWilliams sense of duty was finally called into action that winter, but whatever the reasoning may have been, in 1945, McWilliams transferred to the United States Military Academy, enrolling with the intentions of serving his nation in the Army.

As a part of his service, McWilliams participated in college football in the 1945 season with the Army football team.  During that period of college football's rich history, Army was the powerhouse to be reckoned with, much as Alabama is for the game today.  In the decade of the 1940s, Army head coach Earl "Red" Blaik's team lost just 10 games the entire decade, and Blaik led the vaunted Army attack to three national championships in 1944, 1945, and 1946.  Shorty McWilliams' transfer played great fortune for that 1945 championship team, as he joined the famed backfield of Felix "Doc" Blanchard and Glenn Davis.  The trio formed the top of the "T" formation that would devastate college football in the 1945 season, seeing Army claim its second consecutive national championship, and Blanchard a Heisman Trophy2. 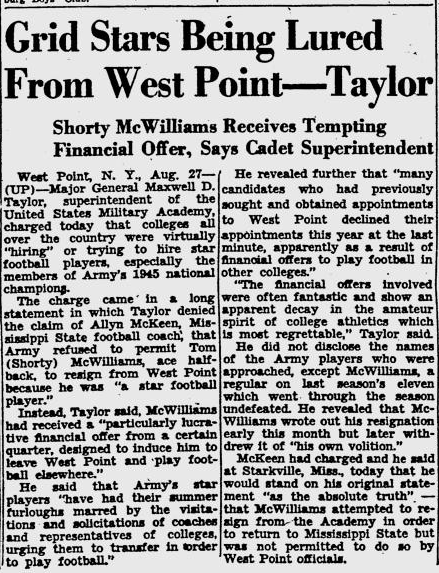 With World War II behind the country, one may think that a transfer from the Army back to a local school would be a standard practice for any student, even a college football player from the nation's best team.  That logic was called into question when McWilliams applied for his transfer back to Starkville, as the request was denied initially by Major General Maxwell Taylor, who was the Superintendent of the Academy at that time.  I can imagine that many were taken aback by this response from General Taylor, but his reason undoubtedly shocked many more.  As it turns out, General Taylor had denied the request for transfer for Shorty due to the charge that he believed that McWilliams had "received a lucrative financial offer" to return to his former school.  That rocked the college football world; such an allegation was unheard of at that time.  But nevertheless, the allegation had been levied, and questions began to swirl around the situation of McWilliams return to Starkville.

Those allegations were met head on by MSU head coach Allyn McKeen, who went on the offensive, challenging3 Taylor to release any proof that he had that MSU had made any such offer to McWilliams.  Even the Southeastern Conference's commissioner at the time, Mike Conner, strongly protested Taylor's allegations, stating that no member institution would offer any incentives to a college athlete outside of his grant-in-aid scholarship.  Like we've seen in certain situations in recent years, McKeen was quite audible about his program's innocence, and that vocal campaign eventually led Major General Taylor to withdraw his allegations against the school.  McWilliams' transfer was allowed, and the All-American headed back to his home state to continue his education, and his college football career.

After the dust had settled and Shorty had returned to play for the Maroons, things picked up right where they had left off in the 1944 season, as McWilliams stellar play led the maroon and white to 8-2 and 7-3 records in the 1946 and 1947 seasons, respectively.  Although State would register a less than impressive 4-4-1 in Shorty's final season in 1948, it wasn't because he performed any less spectacularly than he did in previous years.  After his four years at Mississippi State were complete ─ back then, college players weren't bound to just four seasons, so McWilliams played four total with MSU and the one season with Army ─ Shorty had amassed quite an impressive stat sheet4:

After completing his career at Mississippi State in 1948, Shorty would go on to play professionally for the Los Angeles Dons in 1949, and the Pittsburgh Steelers in 1950.  He even played and coached for a smaller team after his MSU career, but a knee injury in 1955 ended football for McWilliams.

His contributions would return to the state of Mississippi in another form, however, as McWilliams and his wife, the former Gloria Weidmann, moved back to Meridian to purchase and operate the famous Weidmann's Restaurant5, which still serves as one of Mississippi's finest restaurants today.