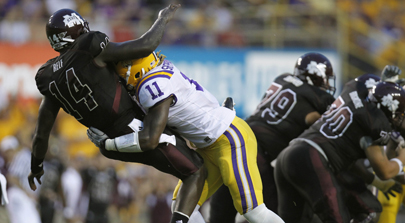 In a way it was fitting that the Mississippi State Bulldogs decided to wear black uniforms last night in yet another disappointing performance against the LSU Tigers. As I watched the Tigers slaughter our beloved Bulldog offense, I truly felt as if I were attending a funeral. Having said that, I hope MSU burns the black uniforms and never considers adorning them again until we have earned the right to do so. Obviously, there is still quite a bit of work to do on offense.

On a positive note, the defense played their guts out. They kept LSU's kicker, Josh Jasper, very busy and before the night was over he broke the school record with five field goals. Going into halftime the Bulldogs trailed 12-0 but the defense allowed no touchdowns during the first half.

Shortly after the third quarter began, it appeared that the Bulldog offense had finally woken up when Tyler Russell led them down the field for a touchdown. That made the game 12-7. Then everything fell apart. By the time the game finally ended the Bulldogs had turned the ball over five times. Five times!!! The end result was a painful and frustrating 29-7 win for the Tigers.

Next up is Georgia (the other Bulldogs). They're coming into Starkville fresh off a loss to Arkansas and they're going to be just as hungry as MSU is for another win. They, like MSU, have a record of 1-2 and both of their losses have also been to SEC opponents. Since Mark Richt has been the coach there the Georgia Bulldogs have never been 0-2 in SEC competition. They will be ready when they arrive at Davis Wade next Saturday. MSU better be too or its going to be a long, long season.