MSU to honor Nick Bell on senior day Saturday, will feature his name in north endzone

Mississippi State will honor Nick Bell during Saturday's Senior Day activities, as this would have been #36's Senior Day as well.

Share All sharing options for: MSU to honor Nick Bell on senior day Saturday, will feature his name in north endzone

Mississippi State will recognize and pay tribute to the late Nick Bell on Saturday during senior day activities in the final home game for many State players. Bell would have celebrated his Senior Day this upcoming Saturday against Arkansas.

Nick played in all 12 games in his freshman year and four games in his Sophomore year before a bout with cancer claimed his life too soon in the fall of 2010, just six weeks into the Bulldog football season.

In addition to having Bell's mother, Linda, attend Saturday's game, the athletics department has also added this to the north endzone in his honor: 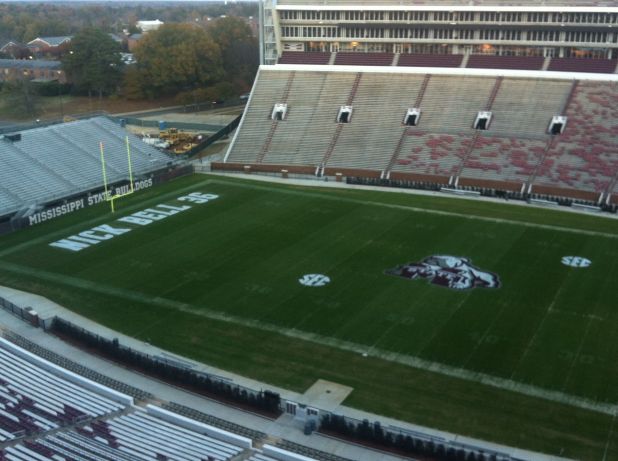 MSU has honored Bell's memory in numerous ways since he passed two years ago, including jerseys featuring Nick Bell patches, and the 36 yard line hash marks being painted black in memory of him. It is truly wonderful as a fan to see the school do this for Bell's family and the players who knew him well, and to not forget him even two years after his death. Kudos to Scott Stricklin, Chad Thomas, Joe Galbraith, and all of the other individuals involved in this.