1. Kentucky - I've learned my lesson about picking against Calipari. Every year they shuffle in another top recruiting class and every year they're right back at the top. Is this class as good as Davis, MKG, and Teague? I don't know, but they're really, really good. Nerlens Noel (#1 center recruit in the country) will be a defensive force from day one, and Alex Poythress is very similar to Kidd-Gilchrist. This team lacks experienced sophomores like Terrence Jones and Doron Lamb that were crucial pieces last year, but Ryan Harrow (transfer/NC State) and Julius Mays (transfer/Wright St.) are both really good players that should help bring the young guys along. Another elite freshman, Archie Goodwin, should light up the scoreboard for the Wildcats.

2. Missouri - They don't have the sheer talent of Kentucky, but they're more experienced and undoubtedly the deepest team in the SEC. It all starts with Phil Pressey, the electric point man who can do it all (10 ppg, 6.4 apg, 2.1 spg). Michael Dixon Jr. is a scorer (13.5 ppg coming off the bench) and lock-down defender. The return of All-Big 12 forward, Laurence Bowers (missed last year with ACL injury) will be huge for a team that was weak in the post. Alex Oriakhi is a another huge addition, literally, for the Tigers after he transferred from UConn. Earnest Ross (Auburn) and Keion Bell (Pepperdine) are transfer additions that averaged double-figures in scoring at their former schools. Jabari Brown is another player to watch. A former 5-star recruit, Brown left Oregon last December and will be eligible for Frank Haith's team in January.

3. Florida - Kenny Boynton (15.9 ppg/4th SEC) is back and ready to lead an experienced group of Gators. They'll miss sensational freshman guard Brad Beal (NBA/3rd pick), but they return three big guys who started a bunch of games last season. Junior Patric Young (10.2 ppg, 6.4 rpg) and senior Eric Murphy (10 ppg, 4.5 rpg) form a strong duo, while sophomore Will Yeguete does the dirty work (4.4 ppg, 6.3 rpg). Post play shouldn't be a concern, but what about the other guards? Mike Rosario is solid, but the Gators will need Top 100 recruits Michael Frazier and Braxton Ogbueze to step up and take the heat off of Boynton.

4. Tennessee - Cuonzo Martin's Vols were the surprise team of the SEC last season. They were a different team once big-time recruit Jarnell Stokes became eligible in January. Jeronne Maymon (2nd team All-SEC) and Stokes (9.6 ppg, 7.4 rpg) combine to form the best post combo in the league. Trae Golden can hoop too. The junior guard averaged a team-high 13.6 ppg and dished out 4.5 assists a game. And every team needs a little white guy that can stoke the three and the Vols have that in Skylar McBee (39% 3pters).

5. Alabama - Sure, Alabama loses their two leading scorers from last season in JaMychal Green and Tony Mitchell, but they still return four starters. Plus, Anthony Grant's 2011 recruiting class (ranked 5th in the nation by Rivals) now has a year of experience under their belt. Plus, junior guard Trevor Releford (12 ppg) is as good as any guard in the league. Super sophomores Trevor Lacey, Levi Randolph, Nick Jacobs, and Rodney Cooper all contributed last year (all averaged at least 17 mpg and 5.1 ppg). Randolph started 32 games and Lacey scored 7.3 ppg. Grant flexed his recruiting muscles once again, signing 5-star forward Devonta Pollard from Mississippi. Pollard (6'8 200 lbs) is a mismatch nightmare because of his ability to score from all over.

6. Arkansas - Marshawn Powell's health will determine if Arkansas is stuck in the middle of the pack in the SEC or vaults into the top four. Powell missed most of last season with a knee injury after he started strong (19.5 ppg, 6 rpg in two games). BJ Young had a fantastic freshman season, leading the Razorbacks in scoring as a freshman and was named 2nd team All-SEC. Rashad Madden and Hunter Mickelson were key contributors as freshman and will look to take the next step as sophomores. Mickelson blocked a school freshman record 72 shots last year, and Madden's versatility proved to be a weapon (6.6 ppg, 3 rpg).

7. Ole Miss - Andy Kennedy will try to finally take the Rebels to the NCAA Tournament with an experienced group this season. Seniors Reginald Buckner (69 blocks) and Murphy Holloway (9 rpg) are a force down low, and Nick Williams (10.1 ppg/ 32% 3pters) and Jarvis Summers (10.4 ppg/43.6% 3pters) can shoot it from deep. With four starters returning (three seniors) and JUCO Player of the Year Marshall Henderson on board, this Rebel team should challenge the three teams above them as a possible top four team in the league.

8. Georgia - Everyone already knows about Kentavious Caldwell-Pope. The McDonald's All-American had a big-time freshman season for Jawja averaging 13.2 ppg, 5.2 rpg, and led the team with 58 steals. Leading scorer Gerald Robinson and all-everything point guard Dustin Ware are gone, so Caldwell-Pope will need help from other players. That help should come from Donte' Williams (7.8 ppg, 5.1 rpg), who started all 32 games last season, and Nemanja Djurisic, a big man who can step out and hit the three.

9. Texas A&M - The Aggies didn't live up to their Top 25 hype a year ago, and their best player, Kris Middleton, is gone to the NBA, but they should be better in their first SEC season than in their final Big 12 season (14-18 overall, 4-14 conf.). Senior guard Elston Turner (13.8 ppg) will lead TAMU along with senior forward Ray Turner (9.1 ppg, 5.5 rpg). J'Mychal Reese (#68 overall prospect in '12) should step in immediately at the PG spot. Another player to look out for is Andrew Young. The JUCO forward averaged 21 ppg. and 15 rpg. last year and was also coveted by Oregon, NC State, and Vandy.

10 LSU - Their fate lies with Johnny O'Bryant. I think he's poised for a big year, and if that's the case the Tigers could finish higher than 10th. Anthony Hickey is another talented soph. (former Kentucky Mr. Basketball) who should improve on last year's numbers (8.9 ppg, 3.8 apg). Depth will be an issue, but O'Bryant, Hickey, and Andre Stringer form a solid core.

11. Auburn - Tony Barbee's teams know how to scrap, but will it translate into more SEC wins this season? Frankie Sullivan can score (12.6 ppg), Chris Denson can shoot (38% 3pt fgs), and Rob Chubb is a decent banger down low (14 pts and 8 rebs. vs. UK last year). Throw in Top 100 recruits Jordan Price and Shaquille Johnson and Auburn should challenge some of their higher ranked peers.

12. Vanderbilt - Last season's senior-stocked team was built to make a run deep into March, but came up just short against Wisconsin in the 2nd round of the NCAA Tournament. They did take down eventual National Champion Kentucky to bring home the SEC Tournament Championship, but that team is gone and so are the familiar names of Jenkins, Taylor, Ezeli, and Tinsley. Those names are replaced by young, talented guards Dai-Jon Parker and Kedren Johnson, both 4-star recruits in 2011.

13. South Carolina - The Frank Martin Era begins in Columbia. Bruce Ellington (11 ppg) returns along with a few other contributors. Martin's teams are notoriously tough, and I don't think this one will be any different, but there's not much talent here.

14. Mississippi State - It pains me to put the Bulldogs here, but I don't really have a choice. Jalen Steele is solid player and should have a nice year, but the team really lacks in experience. Craig "Chicken" Sword and Fred "Flat Top" Thomas should be a fun players to watch develop.

I'll close with the earliest SEC Tournament Bracket projection in the history of the world...Note the new bracket format due to having 14 teams in the league now. 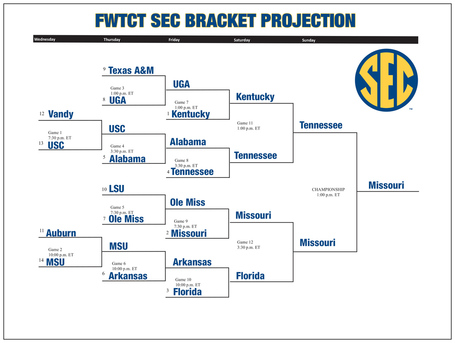