Back by popular demand my laziness, I present to you Cooking with Les Miles, the magazine.

Last fall we ran a series called Farcely Populated. It was essentially the sparely used FWtCT Follies series that we have now, only with a different name. In that series last year, I used this post for LSU week, with some help from my good buddy Blake McCollum on the artwork. I had nearly forgotten the post was even there, until I was sifting through the sites assets and found the picture for the story. Instead of conjuring up some new tale of Les Miles misadventures in clock management, Jordan Jefferson battles' with a 50 yard line security fence, and so on, I decided to re-post last year's work. IT AIN'T PLAGIARISM IF YOU WRIT IT FIRST, PAAAAWWWWLLLLL

Why hello there my fellow southern friends. Let me introduce y'all to my magazine about cookin! 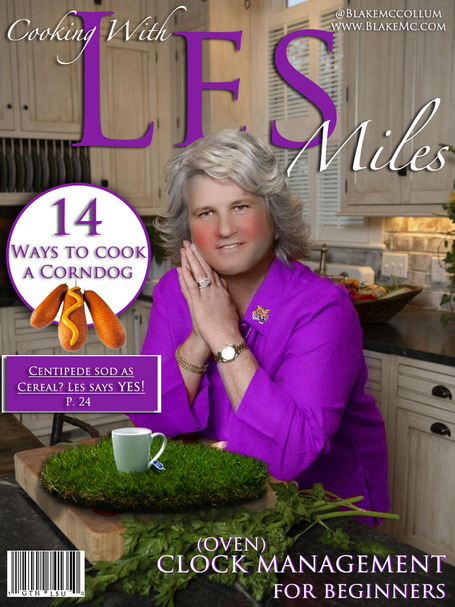 /chews on grass left over from last week's Tiger Eye

Guy's I've got to tell you I've done some fun things over the years coaching those boys on that football field, but I've never been so excited as I am to bring you my magazine dedicated to sharing with you ALL my favorite recipes!

Inside you'll find recipes on my famous corndog pasta salad, my Tiger Surf & Endzone Turf, as well as my 10 ways to avoid oven timer miscues in your kitchen!

/laughs, chews on on grass stolen from 18th green of Augusta

Friend's you too can share in my kitchen joy's by ordering your first 12 copies of "Cooking with Les Miles" for the low low price of $19.95. We except Visa, Mastercard and Lowe's Garden Section credit.

You better call now and get yours because these babies are going faster than Trindon Holliday with his britches on fire!