"Boy, Mississippi State has a ton of folks in Omaha." -everyone. But what about UCLA? Here's my two cents.

Share All sharing options for: OPINION: UCLA fans in Omaha

If you were in Omaha the last few days you heard all of these things nonstop. They were obvious. Mississippi State faithful DID travel well. MSU DID support Omaha's local economy, probably more than almost any other teams (with the exception of LSU.) From the outside looking in, that's truly something to be proud of... no doubt.
But I want to look at something I specifically noticed last night (Game 2) while sitting one row in front of UCLA's 40+ fans in Section 116.
1. FANS WERE CLASSY
I am truly honest when I say this - The majority of UCLA fans I saw/talked to were either quietly classy or outspoken, but game-smart. The parents and family of Bruins LF Brenton Allen sat behind us. Good people. I talked to them a little bit. I'm sure most of the other fans were either family, friends, or important significant others. Their chants were nothing special, but were organized and meaningful. A few fans even had shirts on that said, "Win it for Wooden". They were nothing like the SEC fans we've grown to loathe, talk back to, and in some cases... fight. UCLA had every reason to cheer, and cheer loudly both nights.
2. IT BECAME EVIDENT A GROUP OF LOCALS WERE ROOTING FOR THE UNDER-BEARS
After the 3rd inning, four local males came to sit in front of me. They probably ranged from 16-18 years old. One had no shirt and immediately starting yelling, "U.C... L.A!" before sitting down. After that, they all looked at one another and said, "Glad we are here to just see a National Championship." It then occurred to me UCLA, even though up two or three runs, were looked at as the underdogs. Maybe because of MSU's loudness or the visual admiration of the fans. It was also evident that bookstores and shops had plenty of UCLA apparel, but not a lot was selling. That's where the locals come in again. Another guy told me in the 8th inning that he and his daughter, both of whom are from the area, come to the championship game(s) every year and they wanted to cheer on UCLA in the finals. "No particular reason," he said. "We just liked what we saw on television and wanted to give them our much-needed local support."
3. EVERY FANBASE HAS THAT ONE FAN
You've definitely met this person... if you haven't, you will eventually. I definitely saw UCLA's.
First, this guy was sitting down the row from us about one hour before the game. He had a long-sleeve UCLA Dri-fit shirt, a cap that was clearly bought at the CWS, and a lanyard showing he had "special privileges." Not once did he show tickets or sit in one clear seat. Once the game started he began running his mouth. He said things like, "De-mucus", "Big boy can't play (Rea)", "Ross is toast", and constantly saying "ball" and "strike" after MSU pitches. What a dork.
The dude claimed to have "family" playing but we could never find out who it was exactly. He didn't cheer much for UCLA but he loved bad-mouthing MSU. He told a guy beside me he had another family member that played at Southern California. I got close to asking who it was and searching for him online. He then told the locals that came in he was born in Nebraska and Bo Pelini was lucky to be here. Uh, what?
Lastly, he couldn't stay seated. He got up once and came back telling MSU fans, "...I'm everywhere!" while holding his pass so everyone could see. I wouldn't be surprised if the dude was a local trying to pose as a beloved Bruin. When the game was over, he was nowhere to be found. Another red flag was no one else around knew or spoke to him. I would think if he had a family member on the team other families would have acknowledged him. Nope. He wanted no part in any UCLA fan traditions. He was strictly there to get attention and talk garbage, and he did a phenomenal job. When we left a UCLA fan beside us told my wife, "he doesn't not speak for us."
4. BULLY M.I.A.?
This could be a little picky, and maybe it was addressed, but where was Bully? The real and/or the suited up one? Joe Bruin, pictured below, was all over our section. Really nice kid... I mean Bear, too. So nice he wanted to take a picture with me and the wifey. We said, "What the heck! Why not?!" Come on, it was fun. We were not the only fans that interacted with him, tons of MSU folks around us wanted to meet him. Again, probably something small but you better believe kids and various young people thought of Bully when they saw Joe. 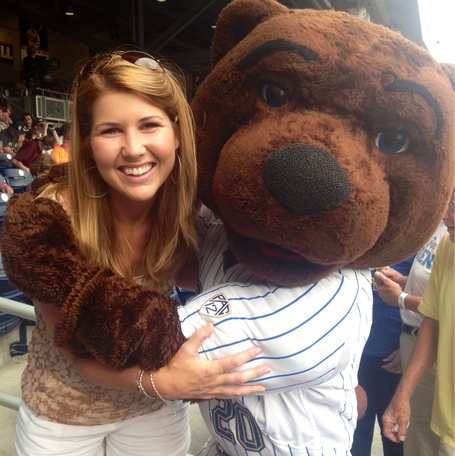 In conclusion I love postseason baseball at any level. And MSU's postseason was terrific. I'm so proud of what they did night after night, weekend after weekend. They had heart. Cohen is doing wonderful things in Starkville, and a lot of the state, and nearby states, are seeing that each season. As I heard many fans say as they often do... I cannot wait until next season.
UCLA was unique bunch. They had never won a baseball title. The Bruins and their fans were not disappointed in Nebraska, and the few that did come obviously had an absolute blast.
#HailState