Ode to Juice: The Dawn of Defensive Mayhem at Mississippi State

MSU Defensive Coordinator Geoff Collins made our heads explode in 2013. Take a minute to enjoy the splendor of the swag that was and the swag that's to come.

Share All sharing options for: Ode to Juice: The Dawn of Defensive Mayhem at Mississippi State

Watching Defensive Coordinator Geoff Collins review recruits’ game tapes on the Mississippi State signing day special was like watching a slightly over-caffeinated kid in a candy store. As he played, paused, and replayed every snap, he could barely contain himself. Mid-sentence, while describing a player’s burst off the line, he interrupted his own commentary just to say what we all knew he was thinking—"I’m getting fired up just watching this."

And I must say, I got fired up too. Not just because his zeal was infectious (though indeed it was). But because after seeing Collins’ defense develop last season, and seeing how his passion for the game bleeds over into everything he does, I am genuinely excited to watch the football this man is going to present on the field next year.

What's more, this excitement is a welcome change to what I and every other Mississippi State fan was feeling about the team’s defense a little over a year ago. Yes the record was better, and yes, the bowl game was more prestigious. But the vibe was all wrong. Many fans were openly calling for a change. And, somewhat surprisingly, that's exactly what they got.

When Dan Mullen demoted—and effectively ended his relationship with—two-year Defensive Coordinator Chris Wilson at the underwhelming conclusion of the 2012 season, most Mississippi State fans met the decision with approval. The team’s defense hadn’t bottomed-out under Wilson’s leadership, but something was amiss. The good performances that were scattered across the previous two seasons were accompanied by some significant regressions. For example, the scoring defense that was 3rd best in the conference when Wilson took over had fallen to 8th. The rushing defense that was 4th best was now 11th. And the 3rd rated third-down-conversion defense had dropped all the way to 13th.

But the most glaring deficiency was less concrete. The style of play and attitude were just off. Instead of talking about the creative, blitzing attack Wilson helped develop with Manny Diaz in 2010, fans openly questioned what seemed to have become an unimaginative, somewhat stagnant base-defense that rarely confused quality offenses.

Whether this was due to a substantial shift in philosophy, or simply the product of a different play-caller leading a different group—one that didn't necessarily feature six future NFL players among the front seven[1]—is difficult to ascertain, especially in retrospect. Suffice it to say, though, that by the end of the 2012 Egg Bowl, the perception was that the change from 2010’s unit was decidedly for the worse.

Enter Geoff Collins. Though he had been the "Co-" Defensive Coordinator with Wilson in 2011 and 2012, he was never really in control of what happened on game day (a fact Wilson was quick to point out upon his acceptance of his new position-coaching gig at UGA). We knew that Collins had worked some not-so-minor miracles in his one-year stint as a Defensive Coordinator at Florida International—an effort that earned him a nomination for an award given to the best assistant coach in the country—but we didn’t know exactly what to expect.

Well, that changed pretty quickly. In his introductory press conference only days after being promoted, he described his coaching ethos bluntly in two words: Defensive Mayhem. This concept was exactly what it sounded like—his defense would emphasize those things that caused "mayhem" on the field. Negative plays, turnovers, disruption behind the line of scrimmage, etc. Immediate references to Diaz flowed freely from the press and fans alike, and many were optimistic about the flavor of defense on tap for the next season.

But now with visions of Joe-Lee-Dunns dancing in our heads, what were we to do for the next eight months? Dissect the film of the spring game and beat-reporters’ practice reports for glimpses of the mayhem? Of course not. Not when this new coordinator is an old-world master whose oeuvre in the medium of sharpie is revealed on social media for all the star-craving recruitniks to see.

Ok then. So we’ve got a promise of mayhem on the field, and an attention-grabbing campaign of hand-drawn, "swag"-drenched recruiting letters that elite high school players are posting on twitter. And Collins had only been on the job for three months. Nice.

But we’re not done. Just in time for the frenzy with which fans bizarrely greet the resumption of the fall semester at schools across the South, Collins unveils the metric for his new institutionalized pandemonium: Juice Points. Energy, passion, aggression, relentless effort, jazz hands, whatever—if you’re a player on Collins’ defense, the more enthusiasm, the better. So just as your tackles, sacks, QB hurries, and pass breakups are charted daily, so too is your demonstrable love for the game.

Outstanding. From the moment he took the podium in January, to the waning days of summer, Collins won hearts and minds with ease.

But then came the game itself. The schedule was loaded in a way that it hadn’t been since at least Mullen’s first season in Starkville (and perhaps before), and the offenses we’d be facing were far from average. Two of our four non-conference opponents were in the top-eleven nationally in total offense in 2012; instead of getting Tennessee in Starkville, we now had to play at South Carolina; A&M, Auburn, and Arkansas became road games; and, yes, Alabama and LSU were still both on the schedule. If things played out even close to how they appeared on paper—and they did—this was an intimidating slate of games.

So even if Collins’ defense was improved, surely it would only manage baby steps in the right direction. Maybe a few more sacks or TFLs, and perhaps a renewed focus on the run to temper the certain massive drop off in the secondary we would experience by the loss of two NFL players—both of whom were named starters in their rookie years—at corner. But that was understandable considering the circumstances.

Apparently Collins didn’t get the memo. Though the team’s defense saw the inevitable ups and downs of a young unit led by a first-year coach, the leap in performance from the year before was remarkable. And this time, there was no need to resort to impressions of tone or style. The proof was in the pudding:[2]

Y’all, that’s some solid stuff. Other than the understandable (though smaller than expected) drop in interceptions, and the admittedly disappointing decline in red zone stops, the defense showed marked improvement across the board. And it’s not like the SEC or MSU’s non-conference opponents experienced an offensive funk in 2013. In fact, it was quite the opposite—while MSU’s FBS opponents’ average national scoring and total offensive ranks in 2012 were 62nd and 59th, those ranks jumped to 41st and 43rd in 2013. Likewise, even some of that esoteric, new math recognized the substantial growth of the defense under Collins’ guidance. State’s national Defensive FEI and S&P+ ratings jumped from 59th and 43rd in 2012 to 25th and 14th 2013.

So to recap: Seriously? Collins did this in one year? With three new starters in the secondary, a new middle linebacker, and youth all over the front seven’s two-deep? In his first ever solo stint as a defensive coordinator in the meat grinder that is the SEC West?

And the post-script isn’t so bad, either: The national champs were taking a look at Collins for their open DC position. But State held on to him, as the two agreed to a multi-year contract and a hefty increase in pay. So he’s coming back next year with an unequivocal vote of confidence from Mullen and the athletic department. His entire defensive staff—which, considering the unit’s youth and experience level, did an outstanding job—is back. And given that his defense returns twenty-one of the twenty-two players on the two-deep from its dominating performance in the Liberty Bowl, I’d say expectations are deservedly high.

So while you calm down from the carnival that was recruiting season and prepare your DVRs for basketball games, baseball series, and the Maroon-White scrimmage, take pause to raise your glass toward whatever glowing screen it is that receives your daily sports devotion. Bully for you, Mr. Collins, and for the players and coaches that brought the noise all season long. Here’s to the juice and the mayhem. May your goblet of swag runneth over. 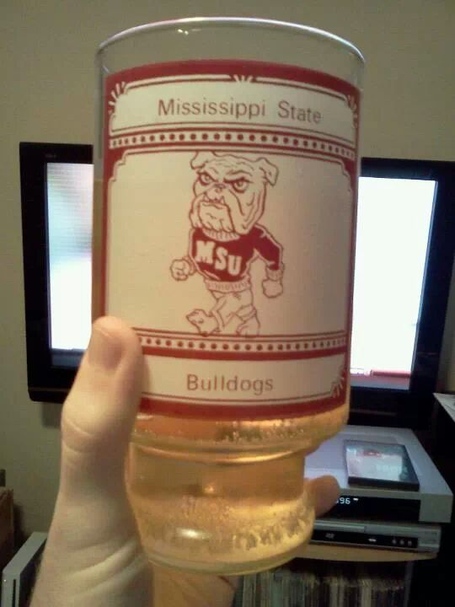 [1] McPhee, Cox, Boyd, White, Wright, and Lawrence are all in the NFL.

[2] Because I used the word "pudding," my brain tells me it is now time to watch this.