In October the Bulldog's will travel to face their permanent cross-divisional opponent Kentucky. MSU has won five straight against the Wildcats and they should expect to extend the streak to six in 2014.

Okay, let's just lay some groundwork about Kentucky football before we go into the real nitty gritty of team analysis. Kentucky is MSU's permanent cross-divisional opponent in the SEC. Their head coach is Mark Stoops, who is about to enter his second season at UK and it seems that to the Kentucky football program and its fans, he's already a god among men. He put together arguably the best recruiting class in the history of Kentucky's program last year and in May he received a contract extension through 2018 and a raise. So, did he win 6 games? Did UK make a bowl game? Did they have a top 10 recruiting class?

No. Not even remotely close.

In 2013, Kentucky won two games. TWO. They most definitely did not make a bowl game and their "amazing" recruiting class was ranked 27th nationally and 9th in the SEC by Rivals.com. Not only did Stoops get an extension and a raise for his efforts but he even got his face on a sweet bottle of bourbon: 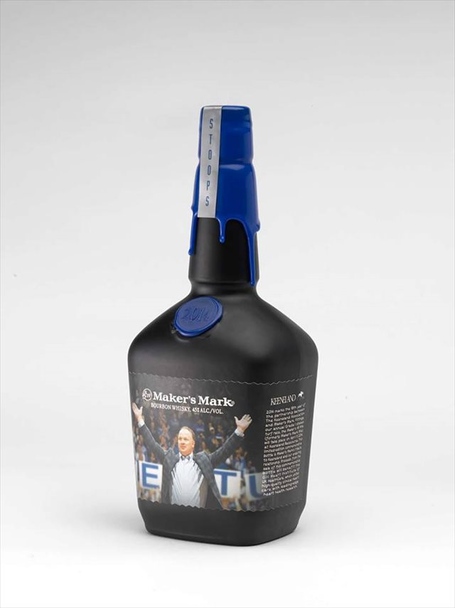 Needless to say, expectations for football are not particularly high at Kentucky.

This is not to say that Kentucky will be bad in 2014. I mean, they will probably be bad, but they won't be THAT bad. Hell, they almost beat us in Starkville last year. My point being, despite the comic reaction to Kentucky's less than impressive 2013 season, the Wildcats shouldn't be overlooked as an opponent.

In 2013 Kentucky was never able to settle on a quarterback and their offensive numbers were lackluster at best. They ranked 12th in the SEC in rushing offense, 10th in passing offense, and 13th in total offense. UK's offensive unit was saddled with not only substandard QB play and a lack of depth but they had numerous injuries that held back their offensive production.

This year the Wildcats return six starters to their offense but they still don't have a set quarterback. Jalen Whitlow, who played under center for a large portion of the 2013 season, transferred to Eastern Illinois and junior Maxwell Smith, who traded playing time with Whitlow, is currently injured and his return date is uncertain. The QB battle looks to have come down to sophomore Patrick Towles, redshirt freshman Reese Phillips,  and true freshman Drew Barker. Towles is the only option with actual experience in a college football game and looks to be the front runner. Offensive coordinator, Neal Brown, will most likely not name a starter until Kentucky's opening game against UT-Martin.

Five of UK's top six wide receivers are returning. Leading receiver, senior Javess Blue, caught for 586 yards in 2013 and will be the Wildcats primary wide out. Freshmen Ryan Timmons and Jeff Badet and senior Demarco Robinson will round out Kentucky's set of receivers. Depth will be a problem in their receiving corps much like 2013 but if the Cats can find a quality quarterback, production through the air should be similar if not better than last season.

UK's backfield will most likely be its strongest position on the offensive side of the ball. Leading rusher Jojo Kemp (482 yards rushing in 2013) returns and Nebraska transfer Braylon Heard, who rushed for 462 yards in his two years with the Huskers, will be another quality option at running back. Talented junior Josh Clemons will also be available after sitting out of the 2013 and 2012 seasons due to injuries.

I'm told Mark Stoops has a reputation of fixing bad defenses. His 2013 defense was certainly nothing to write home about. The Wildcats' D allowed 31.2 points and 427 yards of total offense per game, and ranked 13th in the SEC in total defense. So, Mark has his work cut out for him this year.

If nothing else, UK's defensive line should be quality in 2014. Defensive ends Alvin Dupree and Za'Darius Smith both return. The duo combined for 120 tackles and 13 sacks last year. All-SEC linebacker Avery Williamson graduated but Kentucky's line should still be it's primary area of strength on defense.

The Wildcat's secondary should be the most improved part of the defensive unit in the coming season. The secondary has two notable additions for 2014 in safety A.J. Stamps, who transferred from East Mississippi Community College (of course), and redshirt sophomore J.D. Harmon. Both of these players should bolster UK's secondary with help from returning starters like Blake McClain and Nate Willis, who will lend experience at the cornerback position.

I don't want to count my chickens before they hatch but MSU should be a heavy favorite in this game. Kentucky may be considered a "trap-game" for the Bulldogs because it follows the Auburn game and lord knows what will happen there but that's really no excuse. The Wildcats still need time to develop and they have a long way to go in 2014. In one or two years Mark Stoops may have Kentucky truly competing in the SEC East, or at least winning more than two games, but he'll be crawling out the enormous hole Joker Phillips put the program in for a while. State should win this one big.