Egg Bowl Historical: "Golden Egg" trophy added as part of the rivalry in 1927

The Egg Bowl rivalry has always been a fiercely contested in-state rivalry, but at one point, the fierceness got to be a bit too much off the field among fanbases. What did the two teams do to correct that? They brought about the Golden Egg trophy.

Share All sharing options for: Egg Bowl Historical: "Golden Egg" trophy added as part of the rivalry in 1927

For as long as the Egg Bowl has been a part of most of our lives as MSU fans, the Golden Egg trophy has been synonymous with the game and the spoils that go to the victor. But that trophy wasn't always a part of one of the fiercest rivalries in the south. 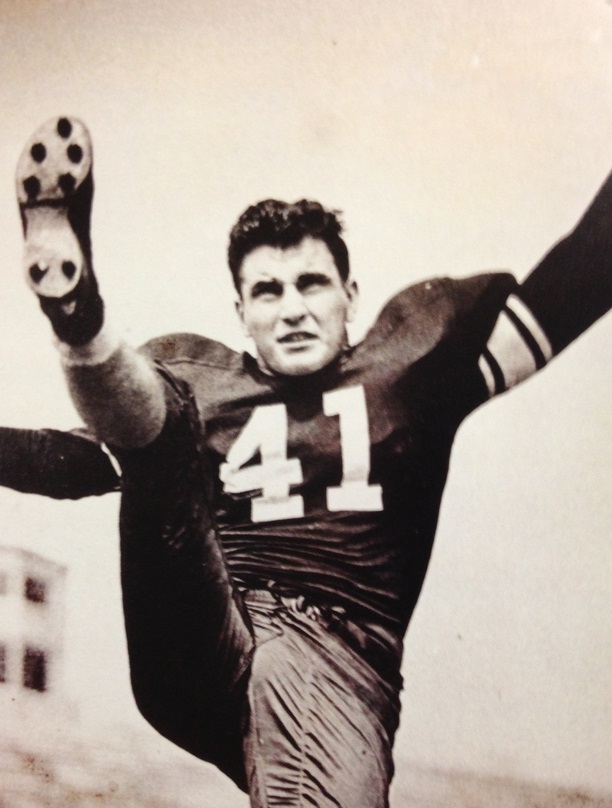 For more great MSU football history, make sure you check out the MSU Football Vault Book

All traditions must be born somewhere, and for Mississippi State and Ole Miss, the tradition of the Golden Egg trophy's use started back in the late 1920s. Mississippi State was in the midst of a streak of dominance in the series, having won the last thirteen games. But in 1926, that would change, as the Rebels took the Aggies down 7-6 in just the fourth game of the series played in Starkville. According to the MSU Football Vault book, there was a ton of tension in the crowd after the game, and tempers flared, eventually escalating into a full-on brawl between Mississippi A&M and Ole Miss fans.

The fight was apparently so bad that officials felt like they needed to find something, anything, that would shift focus on the rivalry away from the hatred for each other, and towards a prize to be gained upon winning the game. The first suggestion was that the losers ship the goalposts to the winners, but that idea was quickly dismissed as being too costly and "cumbersome", as one can imagine. But after just a short time pondering what would make the game more meaningful, the two student associations came up with the perfect idea.

The idea, first originating in the Sigma Iota fraternity at Ole Miss, was to purchase a football-shaped trophy for the rivalry. The trophy would be transferred to the winner each year upon their victory, and kept on their respective campus until the game was played again the following year. The idea was unanimously approved by both A&M and Ole Miss' student associations, and the Golden Egg was born.. Here's an excerpt from The Mississippian on the trophy's berth: 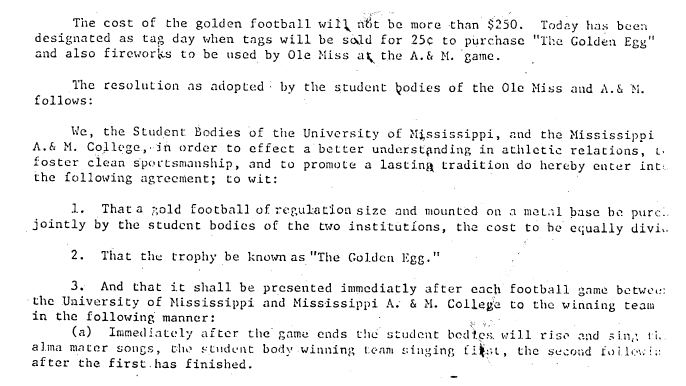 $250! That had to be quite a bit of money back then. The article would go on to detail other parts of the trophy's requirements that we already know, such as the winning team and score being engraved on the trophy each year, and that in the case of a tie (when it was still possible), the team who won the year previous would retain the trophy.

Even though we've had our fair share of differences throughout the years, it's nice to know that in a time when it was needed most, the students of our two great institutions were able to come together, and unite in a cause that today gives fans on both sides the desire for gold. A golden egg, that is.