MSU vs. Oklahoma State Historical: A late touchdown lifts Bulldogs over Cowboys in 1970

In a new series we will feature here each week, we take a look at a matchup with MSU's opponent for the week from each team's history. The first opponent up is Oklahoma State. Here's a look back at the first ever meeting between the Bulldogs and Cowboys in 1970 at Veterans Memorial Stadium in Jackson.

Share All sharing options for: MSU vs. Oklahoma State Historical: A late touchdown lifts Bulldogs over Cowboys in 1970 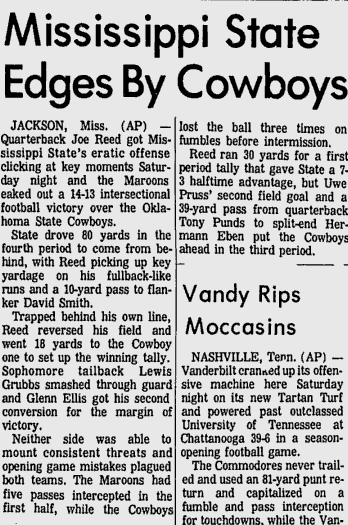 In just a few days, Mississippi State will journey to Houston to take on the #13 Oklahoma State Cowboys. Although it has been a few years, this won't be the first time the two teams have met historically.

MSU and OSU have met four times before, with the most recent game resulting in a 29-11 Bulldog win in Starkville in 1999. The series is tied 2-2 all time, with the home team* winning all four games.

The first of those four matchups from history was a September 12, 1970 bout between the Bulldogs and the Cowboys in Jackson, Mississippi at Veterans Memorial Stadium. Both teams were coming in to start a fresh new campaign in 1970 (much like this year), and the talented teams played a close one throughout.

It was not until Joe Reed led a late 80 yard drive in the fourth quarter that Mississippi State would take the lead, but fortunately, the lead they did take was for good. TB Lewis Grubbs capped the drive with a one yard plunge to tie the game at 13-all, and MSU placekicker Glenn Ellis added the extra point to seal the win for the maroon and white.

That win would be one of six for State in 1970, as the bowl-less dogs took down the Cowboys, Vanderbilt, Georgia, a ranked Texas Tech team, Southern Miss, and Ole Miss. The Cowboys didn't are any better that season, going just 4-7 in 1970.