Get your update on MSU's 2013 class and the rumors surrounding Chris Jones and who else MSU is looking at to fill the remaining spots in the class.

Readers of FWtCT, I would like to wish you a late Happy New Years. I hope that your resolutions are still going strong and that you all ate black eyed peas and any other foods that you feel will give you luck in 2013. I would love to tell you of the motivational and inspirational New Years resolutions that I made, but to be quite honest, I'm still working on those. I'll get back to you guys.

So now, I'll get into your first Crootin' Catch-Up of the New Year....

First off, I would just like to welcome you to the funnest recruiting month of the year. January can be a little crazy. Rumors, visits, flips, flops, announcements, and just about everything in between. The dead period has come to an end and this is the time of year that you can't believe everything you hear. This is when message board posters become recruiting "experts" and everyone has a "source" and everyone knows what is going on in every prospect's recruitment. The truth of the matter is that most of the kids that have yet to decide have no clue themselves what they are going to do. So just let what will happen, happen, and remember what I always tell you guys, this stuff is fluid and nothing is set in stone. Visits will be missed, new names will pop up, kids will commit to places they aren't supposed to commit to. Anything can happen in January.

Now to the Chris Jones rumors. Jones has been a guy that has blown away this week at the Under Armour All-American game practices. Some analysts have even went as far as to say he might be the best challenger to Robert Nkemdiche as the No. 1 player in the nation. Some have also said he has a higher ceiling than Nkemdiche. He has submitted himself as a consensus 5-star recruit. He also has picked up some "drama" in his recruitment. The only problem being, none of the drama is coming from him. People have come out and said that he will be making visits. The truth is that he has not said that. Now, he may end up taking visits, but that will be something we can only speculate on until he comes back from Orlando and talks to his parents. We will find out sooner rather than later if he will take visits. Even if he takes visits, that does not mean it is time to panic. He has a long-standing relationship with MSU's staff and that will be hard for other suitors to overtake with just over a month to signing day. Let this play out and know that it is a long shot for Chris Jones to land anywhere besides Starkville. 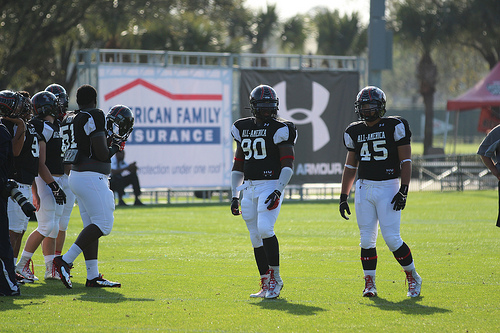 These are some of the guys that MSU is going after the hardest. It is likely that 4 of the 7 players listed above could end up at MSU. I expect no less than 3 of these guys to end up MSU. These players are important to topping off what is, to this point, a pretty complete class for MSU.

Next week, I will be listing all of the players that MSU is still recruiting and giving you guys a percentage chance that the player ends up at MSU. I hope you guys are looking forward to that and I hope your 2013 is going great so far.