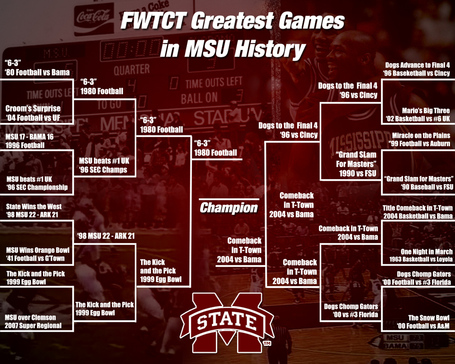 I've written my experience at the game HERE....thecristilmethod has written his HERE. It was a classic game, plain and simple.

Coming into the final weekend, State was 13-2; Kentucky was 12-3. Earlier in the year, UK beat MSU on a buzzer beater in Starkville so they had the tie-breaker. Knowing the Wilcats were to play on Sunday, it was up to the Bulldogs to take care of their own business on Saturday in the Coleman Coliseum.

Things fell apart though. In a year when they almost never trailed (and they never lost on the road), the Dawgs were down 18 at halftime; then 16 with eight minutes to go. But a furious comeback ignited by Shane Power and completed by Timmy Bowers led to an amazing 82-81 overtime victory in Tuscaloosa for the outright SEC Championship.

I wasn't there, but I wish I had been. What an upset. A landmark game for Mississippi State - the football program, the school. Alabama had won 22 straight in the series coming in, they had won 28 consecutive games overall including 27 straight SEC games and were back-to-back defending national champions. The 6-3 victory would vault the Bulldogs from unranked to #19, where they would spank LSU 55-31 two weeks later, then win the Egg Bowl for a 9-2 regular season under head coach Emory Bellard.

Here's a clip of Bear Bryant's coach's show the following week. The Bear congratulates Mississippi State (as he did in the Bulldog locker room after the game) before blaming the food on the bus on Friday night and other foolishness. I find the first 30 seconds quite amusing.