A brief history behind the diamond businessman.

Share All sharing options for: Fifty Shades of (Wes) Rea: A Prologue 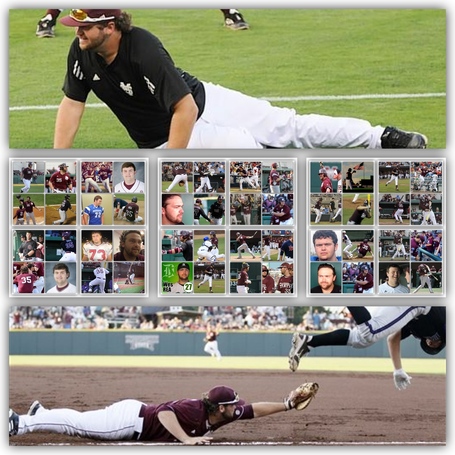 Wes Rea, the Gulfport native and Harrison Central alum, has become a household name the last few weeks. But he's been an MSU fan-favorite for a while.

BRAWNS: The economics major was a two-sport all-state standout while at Harrison Central. He was an all-state, all-coast, and Clarion-Ledger Dandy Dozen member his senior season after batting .478 with 39 RBIs, 18 doubles, two triples, and 14 bombs in 34 games. He was a two-time all-state honoree and rated as one of the nation's top offensive line prospects in high school football. He was selected to play offensive guard in the Mississippi/Alabama High School All-Star game in Mobile in 2010.

BRAINS: He was also a member of the National Honor Society and recipient of his high school's football academic award. He completed high school with a 3.9 GPA, and finished 11th in his senior class.

EXPERIENCE: Wes sat out the 2011 season as a freshman redshirt to rehab an injured shoulder. But he was selected to the 2011 SEC Freshman Academic Honor Roll. In 2012, he started at first base in 63 of the 64 games. He hit .249 and led the team with 41 RBIs. He also led the SEC with a school-record 636 putouts and 58 double plays fielded.

PRESENT: Thus far, Rea is batting .296 through 54 games this season. During his 186 at-bats, he has 55 hits, 11 doubles, seven homers, 40 RBIs and a slugging percentage of .468. Not the most amazing numbers but the kid has been Mr. Clutch as of recent. He can also catch grounders, and slippery chairs, from "Kenny" Holder from across the diamond.

MSU baseball has a couple more days off before they face the winner of Oregon State-Indiana Friday afternoon.

Wes' reversation has been set at TD Ameritrade, and his little black book is filled. A trip to the College World Series finals is on the line.