Share All sharing options for: Stanley Hudson at MSU Graduation!!!

I woke up this morning and checked the twitter to find our boy thecristilmethod's tweet about Stanley Hudson being at the MSU graduation ceremony last night. My jaw dropped.

So apparently Stanley from The Office was at MSU's graduation tonight (h/t @cathylu91) twitter.com/cristilmethod/…

I'm a big Stanley fan. I still tell my wife to "stick it up your butt" from time to time.

While he was in Starkville for this commencement, I was watching my recording of this week's episode (which was the 2nd to last [SAD FONT]), and saw this - which I found Stanley's dancing to be hilarious...

If you've never gotten into The Office, good news: summer is coming up and you'll have plenty of time to watch the entire show start to finish.

Leslie David Baker, aka Stanley Hudson from The Office, was at my college graduation. Yes, that really is him.#collegecareermade #TheOffice

@rachel1067 Well he started cheering at one point when one of the grads crossed the stage, so apparently he had a relative graduate tonight.@kellyroberts912 I know, we debated it for a little while but he was identical to him - same mannerisms as Stanley and everything. Also, @emerkle saw him and confirmed my theory. Nonetheless, I was pretty pumped.

Here's the picture of Stanley sitting in The Hump. 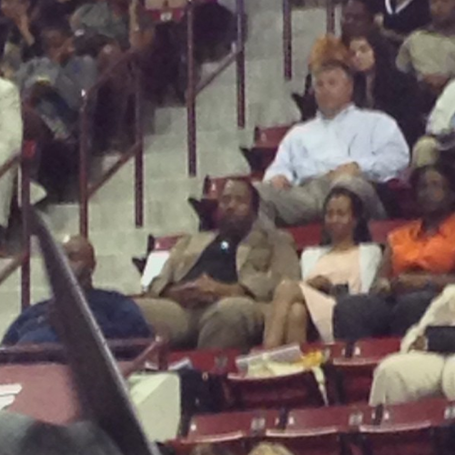 Wait. Is that Bob Vance of Vance Refrigeration sitting behind him?