Best of the SEC Thru Week 4

Since it's the bye week we might as well take a look around the league.

Share All sharing options for: Best of the SEC Thru Week 4

The first four weeks of the college football season are in the books. And just like always, it's flying by. So let's slow things down a bit and take a quick 1/3 of the way through look back at what's gone on in the SEC.

5. South Carolina 35, Vanderbilt 25 - Hey, there's only been 7 conference games so far. Vandy did make a nice comeback in this game only to come up a bit short.

4. Georgia 41, South Carolina 30 - With Florida looking like a shaky team right now this might end up being the game that decided the East. It was a really good game that stayed tight throughout. Georgia really asserted their will in the 4th quarter at home.

3. Alabama 49, Texas A&M 42 - You don't see a shootout like this in the SEC too often, especially when Bama is involved. Johnny Football was everything you'd hope to see, but he came up short on this day. His two interceptions, however, leave you wondering if the Aggies could have pulled it off for the second straight year.

2. Auburn 24, Mississippi State 20 - As much as it pains me to put it here, looking from the outside as just a fan of football, this was a great game. The Tigers got out to an early 11-0 lead, MSU went on a 20-3 run to take an early second half lead, and Auburn won it on the final drive with :10 to play.

1. Ole Miss 39, Vanderbilt 35 - This game pains me just as much but it was an incredible game as far as the twists and turns involved, and was a heck of a way to kick off the season. OM got out to an early 10-0 lead, Vandy comes charging back in the 2nd quarter with 21 unanswered points, and the final two minutes provided incredible drama. Down 32-28, Jordan Matthews, who had an incredible game, is throwing up on the field just minutes before catching a 42 yard pass on 4th & 18; and the Dores get the go-ahead touchdown on the next play. Ole Miss gets the ball back with 1:30 to play and Jeff Scott runs 75 yards for a touchdown to take back the lead. Since he did it so quickly there is still time on the clock, and the OM kickoff team allows the return to come back to midfield. On 3rd & 4 the ball goes through Jordan Matthews hands for what would have been a first down but it is intercepted and the Rebs win.

Like I mentioned, we are still early in the year as only 7 games have been played. That leaves us with 49 to go (88% is left, phew).

5. LSU at Ole Miss (Week 8) - The Rebs always play LSU tough and this one is in Oxford under the renewed optimism they've got up north. Both teams are coming off some of the toughest stretches of games of any team in the country and that may have an affect.

4. Georgia at Florida (Week 10) - The world's largest outdoor cocktail party is always an event. Could UGA really win this three years in a row? Will Muschamp will feel the water starting to warm if he does...Florida had won 18 of 21 prior to his arrival - even Ron Zook won 2 out of 3.

3. LSU at Georgia (Week 5) - This one is coming up this week, and it will be a showdown for sure. We already know what the Bulldogs have but this will be LSU's first major test. Should be an electric game.

2. Texas A&M at LSU (Week 13) - Both teams have bye weeks to prepare for this game. It should be a battle in an old rivalry renewed that the Tigahs won last year in College Station.

1. LSU at Alabama (Week 11) - Both teams have bye weeks here as well, just as they did for the 'game of the century' two years ago. This is the most compelling series in college football right now.

*Notice LSU is listed in 4 of these top 5 games and I didn't even list their game with Florida. They are good, and have a tough schedule.

5. Ole Miss vs. Texas A&M (Week 7) - The Ags nearly lost this game last year albeit due to 6 turnovers. The game is in Oxford again this year so it could be another tight one.

4. Mississippi State vs. LSU (Week 6) - Call me a homer but I still think the schedules set up as good as it possibly can for State going into this game. We have a chance, not a good one, but a chance.

3. Vanderbilt vs. Georgia (Week 8) - The Commodores will have a chance to get their legs back under them the next two weeks with UAB and Mizzou, then they have a bye before playing Georgia at home. The Dawgs, of course, always have bigger fish to fry this year and this game has been close at times.

2. Mississippi State at South Carolina (Week 10) - This is the Gamecocks final game in a 5-week sampling of the bottom half of the conference. State going into Columbia will is no small task, but there is a chance here despite what some may believe.

1. Ole Miss vs. LSU (Week 8) - It's kind of hard to say this can go in the big game category and the upset category, but it can. OM does usually play LSU tough, but they still shouldn't win even at home.

4. Tennessee at Missouri (Week 10) - This game will be crucial to both team's bowl chances, and it may be the game that determines whether or not Mizzou retains Gary Pinkel - a must win at home.

3. Ole Miss at Auburn (Week 6) - The Tigers have a week off prior to this game and OM is coming off Alabama. Auburn already won their first swing game of the year, winning a second would be huge.

2. Florida at South Carolina (Week 12) - Once this game comes around we'll know just how big it is. Depending on what Georgia does against LSU and Florida, this game could present the possibility of a three-way tie, this game could be for the division, or it might not really matter because Georgia will have things locked up. But anytime Spurrier goes against his former team it is interesting.

1. Egg Bowl (Week 14) - This game is big every year, but now you've got two programs that are winning and this game is paramount for MSU to hold serve at home.

2. Jadeveon Clowney, USC - I know he's had a "slow" start, but they guy is a beast, and even with everyone focusing on him he's still made some noise, even if it's not the incredible clash everyone was hoping for.

4. Jordan Matthews, VU - He is a phenomenal receiver. Always open, always reliable. Even if he did drop that ball against Ole Miss, what he showed me in that game was beyond impressive.

5. Dominique Easley, UF - This guy is awesome to watch. He is an absolute force on the Gators' defensive front.

1. Alabama (3-0) - They haven't looked invincible, but I'm not ready to dethrone them yet.

2. LSU (4-0) - They could jump up to #1 if they beat Georgia, but right now they've beaten an overrated TCU team, two patsies and a somewhat down Auburn at home.

3. Georgia (2-1) - This is a really good team and they will prove if they really are contending for the SEC/National Championship this week.

4. Texas A&M (3-1) - The Aggies are really good on offense. But there are so many questions on defense I wouldn't know where to start...and that might end up costing them a game they aren't expecting to lose.

5. South Carolina (2-1) - The road is clearing up for the Gamecocks coming off a bye, they might be able to just set the cruise control until Florida or even Clemson in mid-late November.

6. Ole Miss (3-0) - I keep thinking OM is going to lose games but they haven't. Fingers crossed for a 4-game losing streak coming up.

7. Florida (2-1) - Their defense is really good. But like A&M the other side of the ball is not so good, and it's already cost them; plus not they've lost Driskel.

9. Mississippi State (2-2) - Homer pick? Maybe. But State has the 2nd best scoring defense in the SEC right now and that group looks really strong. Offense is coming around too with the emergence of Dak Prescott.

10. Vanderbilt (2-2) - Like MSU, the jury is still out on whether they can knock off anyone good (but I'll give the Dawgs the benefit of the doubt and rank Vandy lower).

In closing, I'd just like to point out how over-rated LSU's fanbase is. After our game with Troy was over I flipped over to their game against Auburn last week, and with six minutes to go, up only two touchdowns, the stadium was half empty! They did the same thing last year against us. 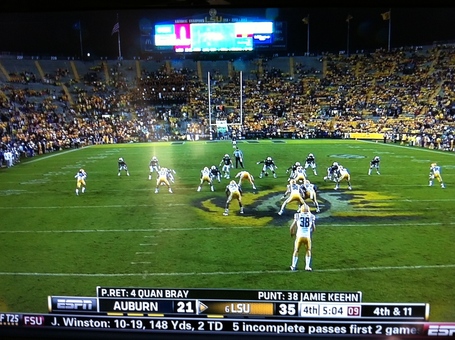 A 2-touchdown lead with that much time left is far from a sure thing. Auburn had an on-side kick which they actually recovered, but I believe was erroneously overturned by the replay booth, yet still got the ball back again, punted again, then had more time to drive all the way down the field, into the LSU red zone where they were unable to convert for a score. It was the same situation MSU was in last year - down two scores with two minutes to go, inside the 10. Russell threw a pick-6 which made the score much worse than it was, but we could have scored a touchdown and then tried an on-side kick. Auburn had the same scenario - but half the stadium was empty! And these are supposed to be great fans? Hogwash.