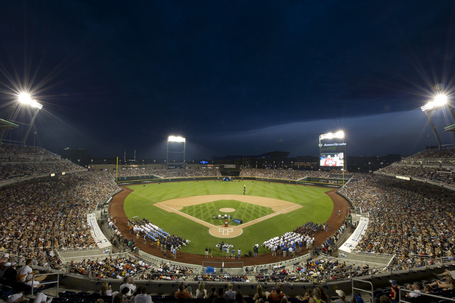 Since 2011, the CWS has been played at TD Ameritrade Park, but from 1950 until 2010 legendary Rosenblatt Stadium housed the collegiate finals. In 2009, Omaha announced a new 25-year contract extension to keep the CWS until 2035. That goes to show you how much the city, the fans, and many organizers think of this venue. It's truly the crème de la crème of college baseball.

Speaking of TD Ameritrade, let's take a look at a few stadium tidbits/specs:

To jog your memory, MSU went 3-1 in the Starkville Regional against Central Arkansas and South Alabama. They then traveled to Virginia and won the Charlottesville Super Regional with 11-6 and 6-5 victories over No. 6 seed UVA. No. 3 seeded Oregon State, coached by Pat Casey, won the Corvallis Regional (going 3-0 in games against TX-San Antonia, UC-Santa Barbara, and Texas A&M. They hosted and won their Super Regional with 12-4 and 4-3 wins over a high-powered Kansas State.
For MSU, senior RHP Kendall Graveman (7-5, 3.14 ERA) gets the start. For OSU, freshman LHP Andrew Moore (14-1, 1.36 ERA) will be on the mound. Moore was named a first-team All-American by Baseball American earlier this week. He's also won his last nine decisions and was selected as the Pac-1012 freshman of the year. Can State's bullpen do miracles like they've done the last few weeks? The first few innings will definitely tell the tale.
The Bulldogs are 30-5 when scoring first this season. Early momentum is huge for this squad. Sophomore Jonathan Holder is in search of the school record in saves needing two more to tie. Junior Hunter Renfroe (.360, .445 on-base %, .644 slugging %, 15 HRs, 61 RBIs) the 13th overall selection by the Padres, is currently 21st in the nation in batting and 13th in total bases.
The Beavers aren't too shabby either. This is their fifth CWS appearance with an 11-6 career record, and back-to-back titles in 2006 and 2007. Other than losing their first game in the Supers, they've been spectacular. Be on the lookout for these sensational sophomore hitters: Dylan Davis (.343, .521 slugging %, 58 RBIs), Andy Peterson (.329, 45 Rs), and Michael Conforto (.320, .515 slugging %, 11 HRs, 45 RBIs). They are second in the nation in ERA (2.27) and third in WHIP (1.07). They've also not lost at a neutral site this season (5-0). Find out more about the Beavers in MBD's preview.

Leave your comments below. We hope today's game is as exciting as the last two weeks have been for John Cohen's gritty Bulldogs.