With MSU set to make its 9th trip to the College World Series in Omaha, let's take a look back at the first ever team to make it, the 1971 Bulldog baseball team.

Share All sharing options for: A look back at MSU's first College World Series team in 1971 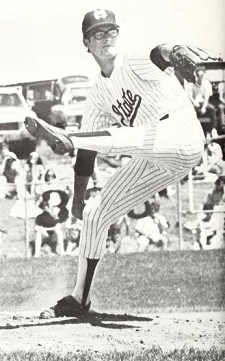 I don't know about you, but as a fairly young MSU baseball fan (mid to late 20's), when people talk about MSU baseball history, I tend to immediately think back to the 1980s. There were so many great teams in that decade, and if you lumped in 1979 and 1990 with that time period, MSU went to the College World Series four out of the 12 years, which is definitely the most successful stint by that measure in the school's history. But it's easy to forget the plethora of success enjoyed by MSU's program prior to the 1980s, especially the success just a decade before under Hall of Fame coach Paul Gregory. Gregory, who often gets lost in the shuffle of great MSU coaches behind Ron Polk and Dudy Noble, guided the Bulldogs for 18 successful seasons, a run that included a 328-200-1 record, four SEC championships, and one College World Series appearance.

As a matter of fact, it was Gregory who guided the Bulldogs to their first ever berth in the final tournament held in Omaha. His 1971 team featured Bulldog hall of fame greats like Bobby Croswell and Mike Proffitt, along with Ted Milton, Phil Still, and many, many others. That 1971 team started the season off with a modest 19-9 record before reeling off six straight wins over Ole Miss and two wins over Vanderbilt in the SEC playoffs to claim a second straight SEC crown. But the Bulldogs wouldn't stop there this season. After the 29-9 regular season finish and SEC championship had been claimed, the Bulldogs headed off to the District III tournament in Gastonia, North Carolina (where?), eager to avenge the prior season's end result. 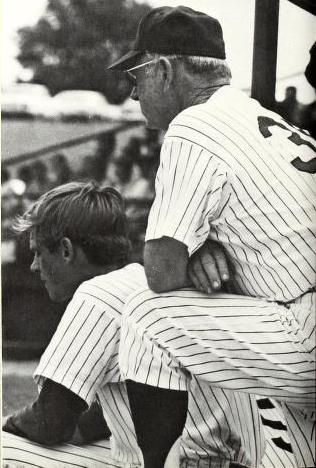 For more on the 1971 baseball team, make sure to check out the great online MSU Reveille

You see, just a year before, in 1970, after Gregory's squad had won an SEC championship, the Bulldogs stumbled in the District III tournament held in Gastonia, losing an opening game to Maryland 3-2, and then winning two games before eventually succumbing to the Florida State Seminoles, 5-4. That team was considered to be immensely talented, but ultimately fell just short of the final eight tournament, a goal that every program holds near the top of their priorities each season. It should be noted that the 1970 squad went into the District III tournament minus four of its best players, which according to the 1972 edition of the "Reveille", where declared ineligible by the NCAA. That is a story for another time, and nevertheless, the shorthanded Bulldogs had fallen just short of a first ever trip to the midwest final.

Anyways, back to 1971. The Bulldogs had made their way back to Gastonia for another go at the District III tournament, and this time, they would not fail. Mississippi State would this time defeat those same Maryland Terrapins 2-1 in the opener, and they followed that up with a 7-3 win over the Hurricanes of Miami (Fl). State would then take a 20(!)-8 setback to the Georgia Tech Yellow Jackets, a fellow SEC member just seven years before, but they rallied, winning the decisive game 5-2 over the Jacketse to earn their first trip to Omaha and the College World Series in school history. 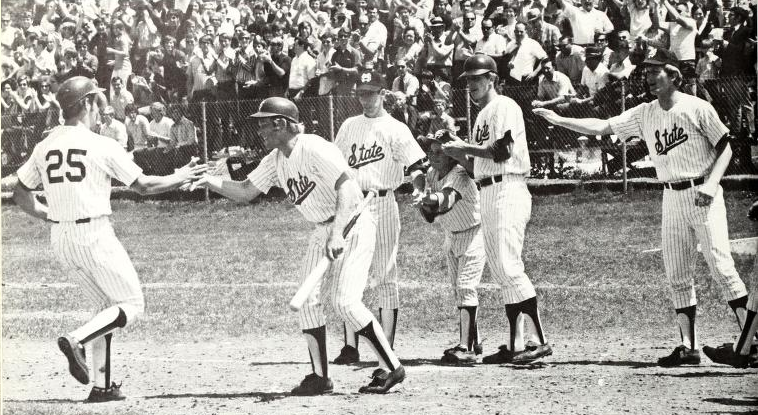 Above: State welcomes Ted Milton into home plate after a home run

Mississippi State had finally made it to the final stage in Omaha. Although the Bulldogs did not have a great showing once they got to Omaha -- they lost their first two games to Tulsa and Brigham Young and went home --, that year would serve as a new benchmark of success that future teams would be judged by. It would be another eight years before Mississippi State would return to Omaha (under new head coach Ron Polk), and although State has made the journey several times since then, many will always remember the '71 team for being the first to take carry the maroon and white torch the 800+ miles northwest to Omaha and college baseball's greatest stage, the College World Series. 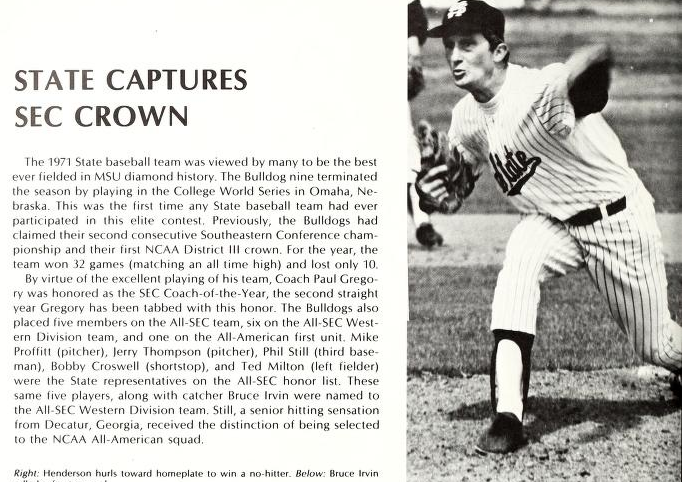 Photos included where used with the permission of the Mississippi State University Libraries, University Archives
For more great MSU history, make sure to check out the library on Twitter at @msu_libraries