Here's a photograph of a young Jack Cristil interviewing Elvis

Two Mississippi legends crossed paths at a young age in this fascinating photograph of a young Jack Cristil interviewing Elvis.

Share All sharing options for: Here's a photograph of a young Jack Cristil interviewing Elvis

Whether you are a Mississippi State fan or not, this may be one of the coolest glimpses of two Mississippi titans crossing paths in our state's rich history. Although I've done some exhaustive internet searching over the past several days, I cannot find the origin of the story behind the picture you see below. Nevertheless, I felt it interesting enough to share even without the back story, because: 1) Elvis 2) young Jack Cristil 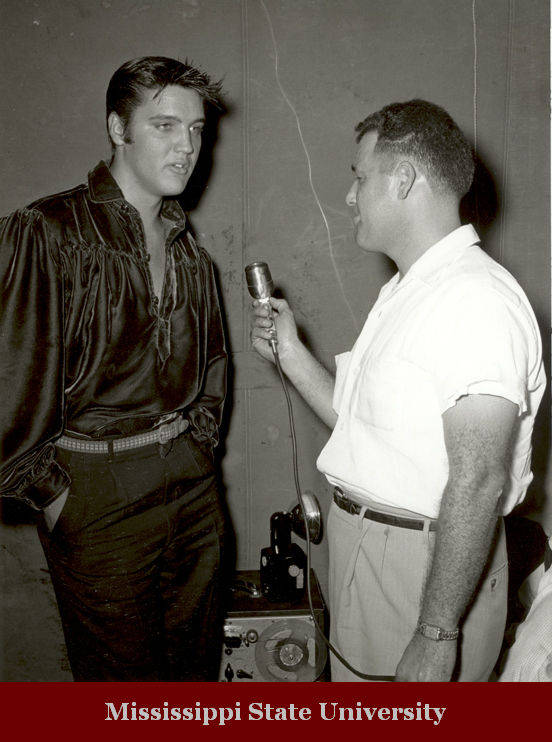 Jack is a native of Memphis, so it's logical that he could have crossed paths early in his career with the star musician at some point. Between his time studying broadcast journalism at the University of Minnesota to his taking over football play-calling duties at MSU in 1953, Jack worked all sorts of broadcasting jobs, from calling minor league baseball games across the south, to even calling some high school football games. There's a good chance that he might have made time in there somewhere to interview a local rising music star. There's also a chance that this took place after he started at Mississippi State. I just don't have that information.

[UPDATE: 1:10 P.M.] Thanks to the efforts of Allen Coleman, Braden Bishop, and Neal McCoy -- who is with the Tupelo Convention and Visitors Bureau -- we have more information about the picture -- The photo above was taken at Elvis' appareance at the 1956 Mississippi-Alabama Fair, held in Tupelo. Elvis had just appeared on the Ed Sullivan show for the first time just a few weeks before the Fair, and was making a return trip to his hometown to perform. Jack Cristil was working for Tupelo AM station WELO at the time, and recorded the interview while covering the event for the station. Even cooler: you can apparently download the interview on Amazon.

Here's some footage and audio from Elvis' appearance at the fair:

[UPDATE September 8, 2014] Sadly, our beloved radio voice, Jack Cristil, has passed away after a battle with kidney disease and cancer.  However, in the midst of sharing amongst the Bulldog family, the following audio surfaced from Jack's interview with Elvis depicted in the iconic photograph above.  I wanted to add the audio to this post so that some future Bulldogs that stumble upon this one day may enjoy Jack's voice one more time like we all were fortunate enough to for over 50 years.  Rest in peace, Jack